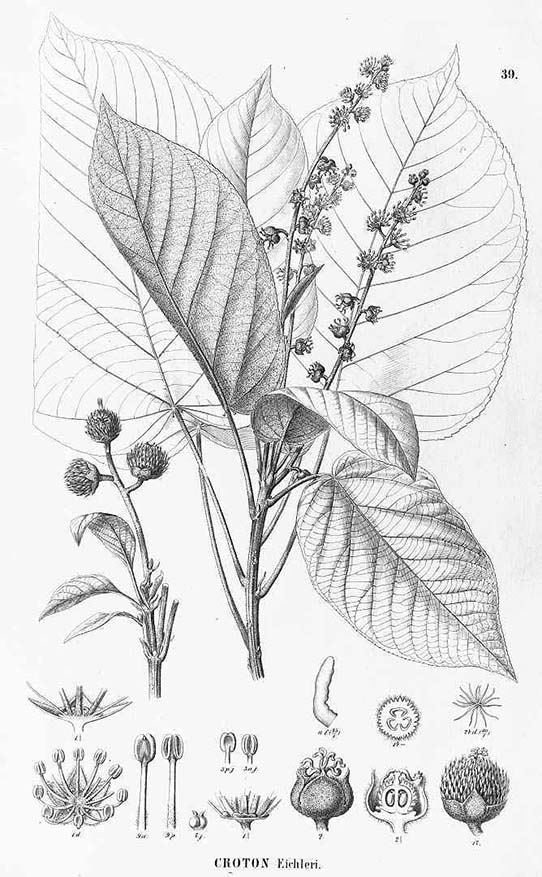 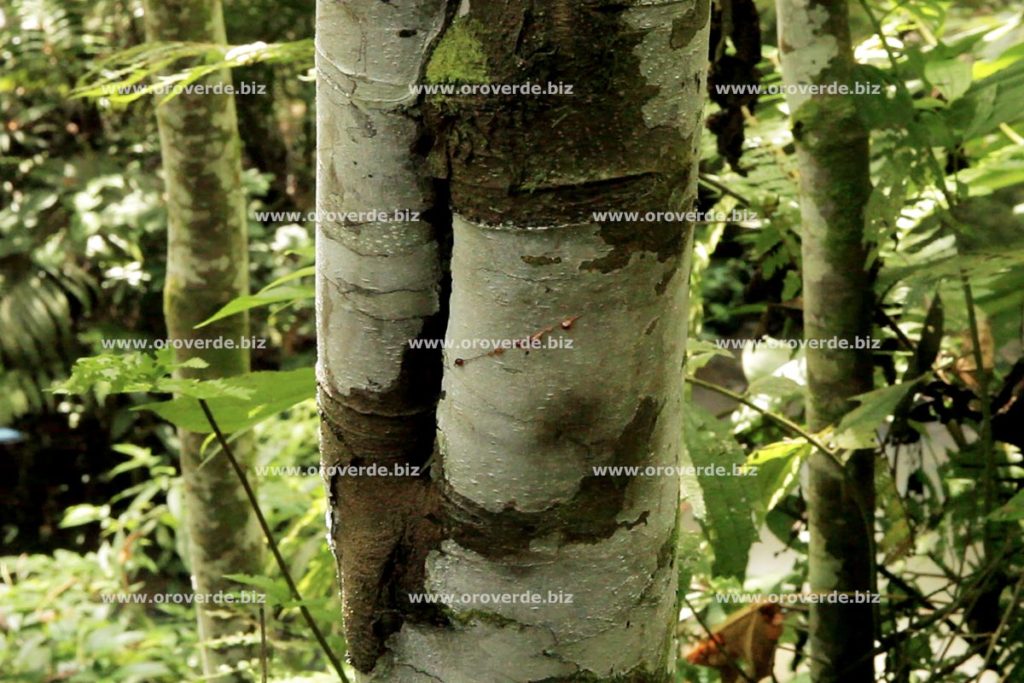 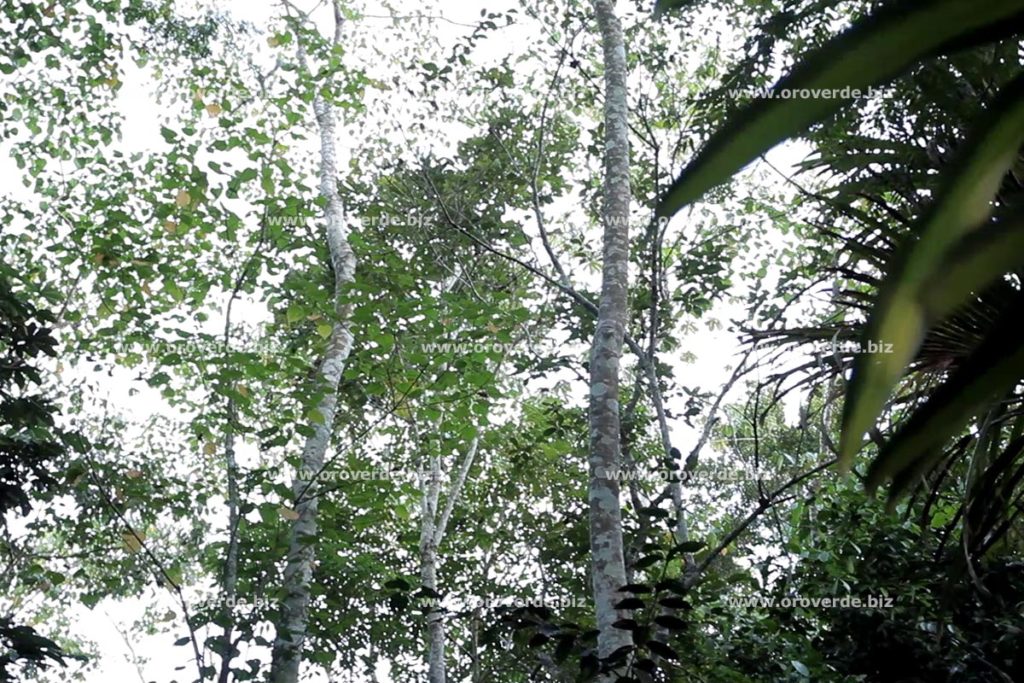 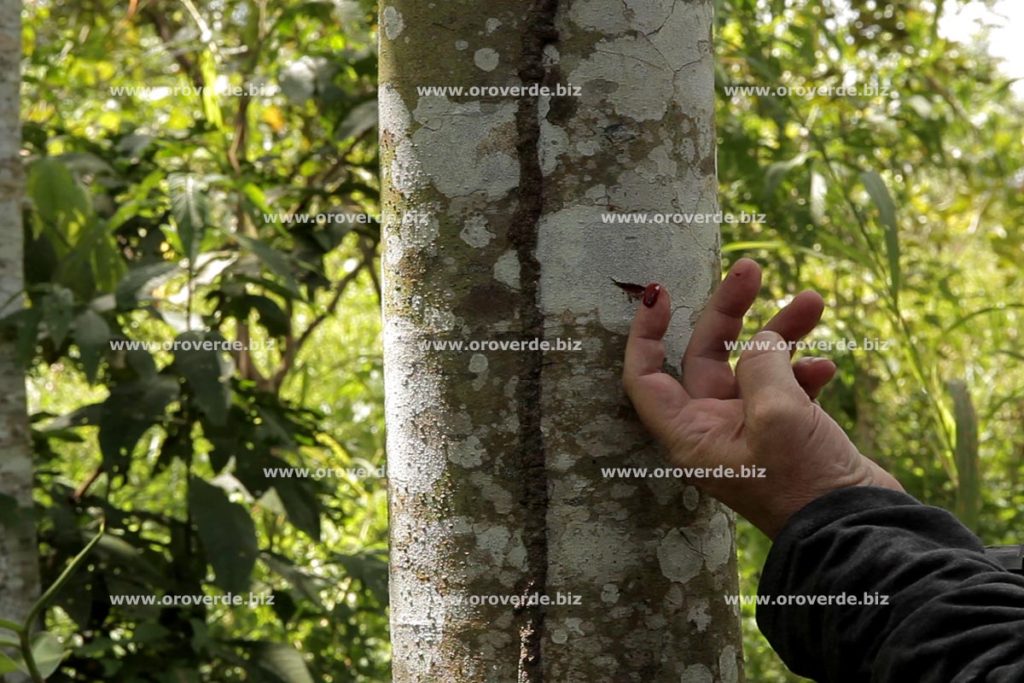 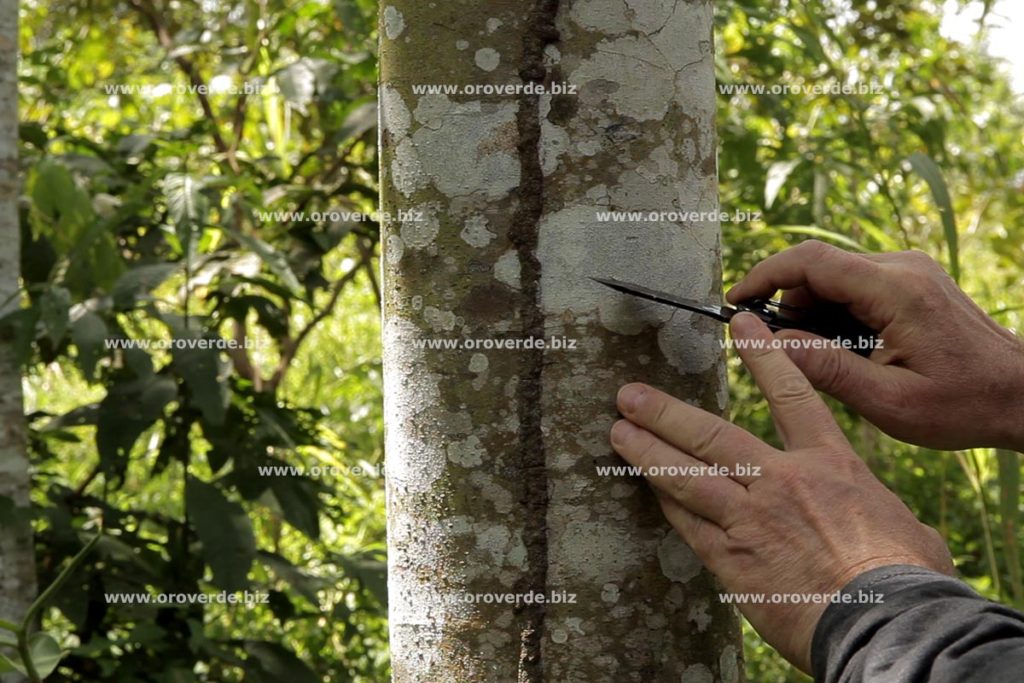 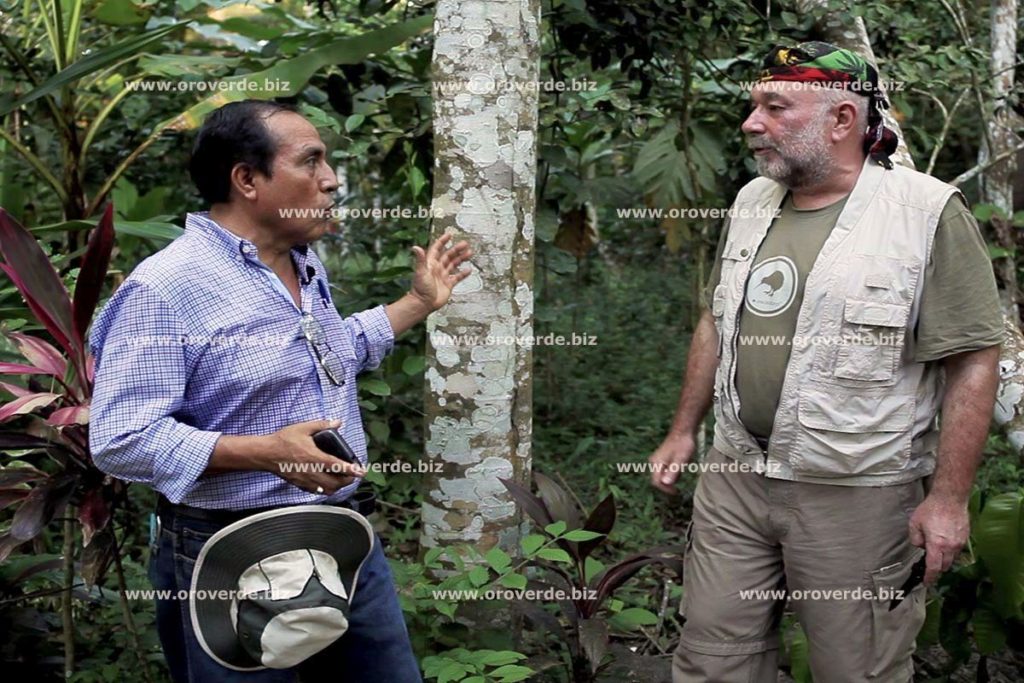 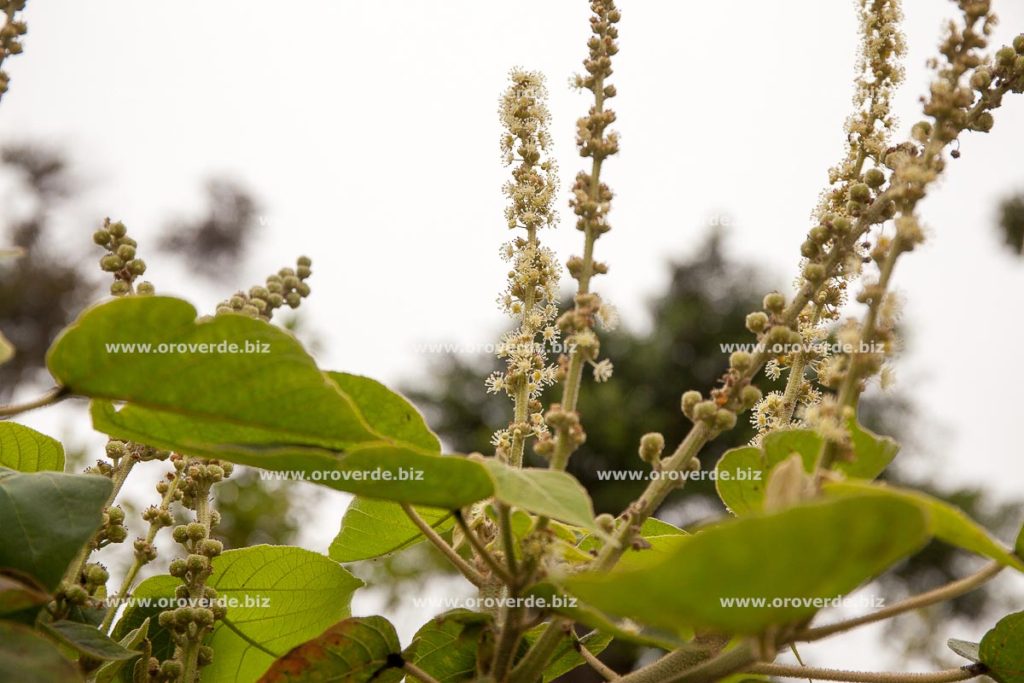 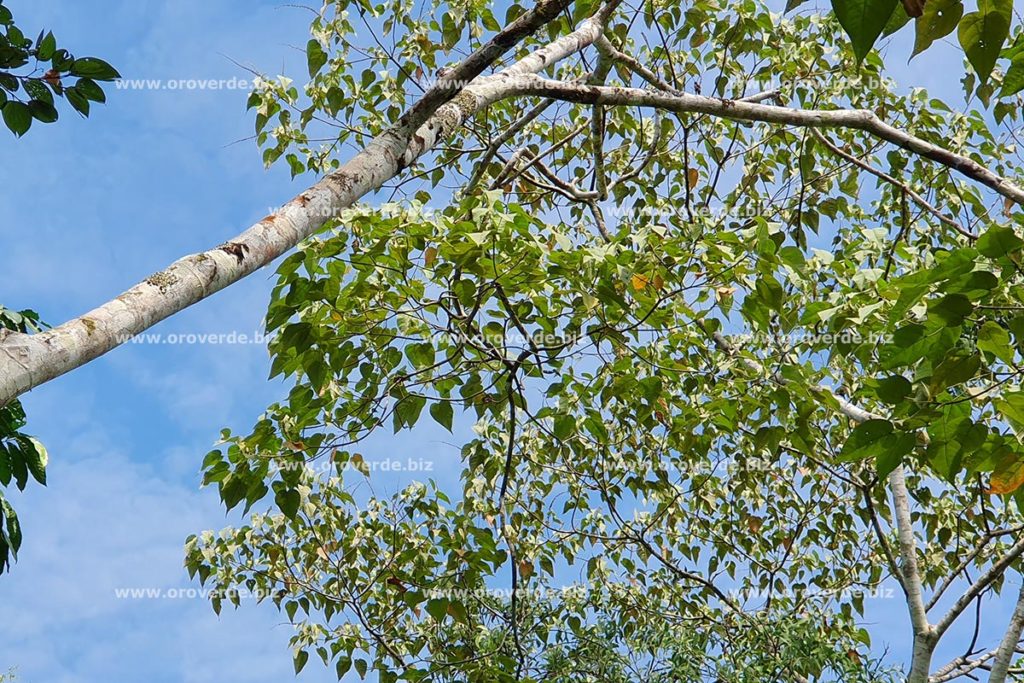 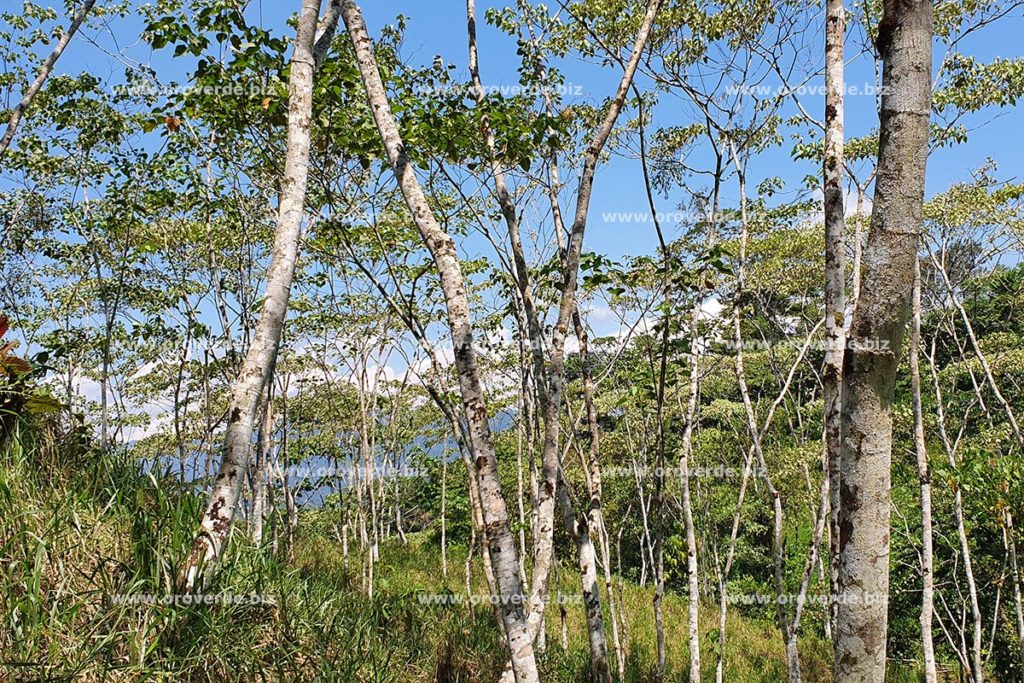 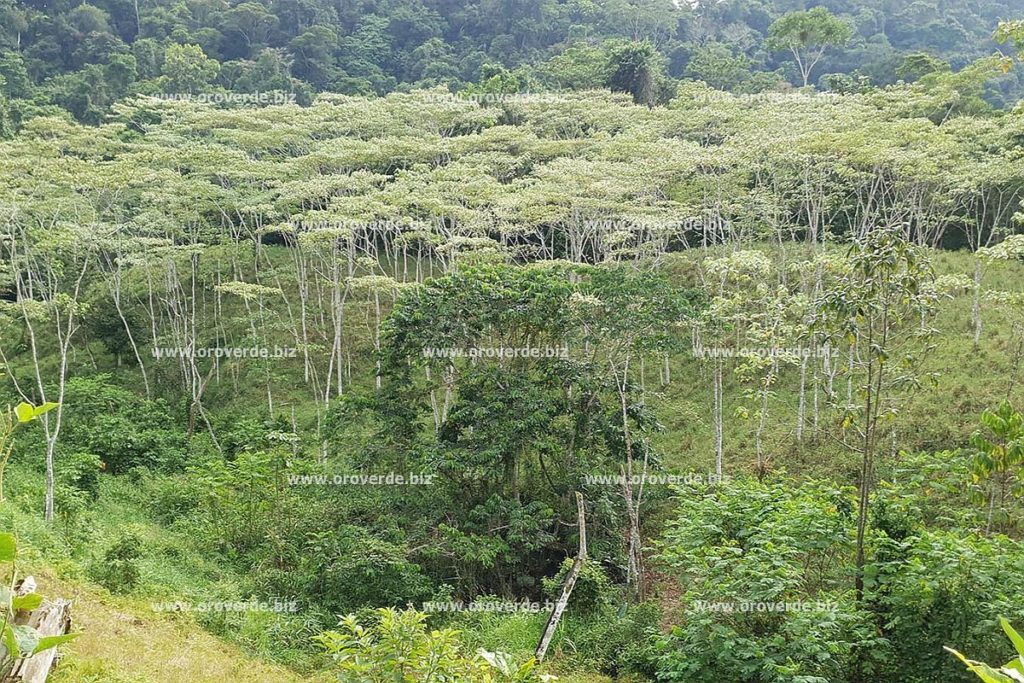 Sangre de Drago, spanish name of dragon´s blood is a tree growing up to the lenght of 10 – 20 metres from the tropical amazonian territories of Southern America. Genus Croton is very rich, count over 750 kinds of trees and species located on the both half-worlds. The trunk is very rich on active alcaloids and many species are traditionally famous for its herbal drugs, especially for its purgative and tonizing effects. Although high, the tree trunk does not use to be stronger than 30 cm at average. The trunk is covered by soft brown-grey dapple bark, leaves are heart-shaped, light-green, the flowers are uniquely light green-white on the long peduncles. If the bark of the tree is cut or clapped, flows out a dark red sauce, foaming blood, as if the tree bleeded – from there is the name „Dragon´s blood“. This „blood“ has a long tradition between native tribes of south-american Amazonia. For the first time it is described around the year 1600 by spanish naturalist and discoverer, by father Bernabé Cobo, who described the healing effects of the sauce, generally famous between communities of Mexico, Ecuador and Peru. For centuries were with this sauce ( resin, blood ) coated the beats to stop the bleeding, to accelerate the recovery, to close the beats and protect the injuries against infections. The blood dries very quickly and create secondary skin. The internal usage of Peru aboriginals for leucorhea, fractures or piles is so usual as the usage when stomach furuncles. Other tribes use it also for dysentery, enteric fever, pyorhea, when vaginal bathes before parturition, to stop bleeding after parturition and for dermatogenic problems.Sangre de Drago is traditionally used in the herbal medicine in South America. In the peruvian medicine it has very wide usage and is recommended for external usage as a potential healing agent for antiseptic vaginal bathes, dermatogenic problems as eczema, for voiding of the sore insect bites. Internally it is used when piles, oral small ulcers, tonsilitidy, infections in throat, tuberculosis, stomach furuncles, digestive problems, rheumatism and to strenghten the pregnancy. Sangre de Drago became the basic for two pharmacs in USA, – Shaman Pharmaceuticals Inc company developed two preparations containing antiviral elements, extracted from the Croton lechleri blood and bark. It is Provir, a drug aplicated by mouth against viral infections of the respiratory tract and Virend – topical antiviral drug against herpesvir ( belt herpes ).

Though a lot of researches were realized to the clarification of the drug´s (herb) characteristics, the most of them were not published or accessed to public. Active substances include proanthocyanidins ( antioxydantes ), tannins and lignan called dimethylcedrusin and alcaloid called taspin. Other researches of taspin from 1977 showed its ability to inhibit RNA – DNA polymerase in myeloblastous virus, Rauscher leucemia virus and Simian sarkomvirus. Alcaloid taspin was documented for the first time by antiflogistic activity in 1979. In 1985 was documented the anti-inflammatory and antiviral effect, against the sarkom development. The beats- healing and cicatrisation effect on open injuries of Sangre de Drago was assigned also to the alcaloid taspin in 1989. Several later studies from 1991 and 1993 were aimed on healing and agains-tumoral characteristics of taspin. Lignan dimethylcedrusin was isolated by scientists in 1993 and showed also very important role (together with taspin) when healing process of beats and scars reimbursement. A belgian study proved the effects of the blood when stimulation of the scars (beats) contraction, helps to create a formation of a new skin and assists at creating of new collagen. A comparing study showed the ability of raw blood to heal the beats and form the collagen creation four times more effective than the isolated substances of dimethylcedrusin or alcaloid taspin. The belgian scientists also found out the antiviral ability of taspin and dimethylcedrusin against herpetovirus. In 1994 were discovered other phyto-chemical substances, including fenols, proanthocyanadins and diterpens, that proved a certain antibacterial activity. Up today were registered four patents in the USA on the blood from C. lechleri. The first one was Walter Lewis who in 1992 isolated the alcaloid taspin from the blood and digested it in DMSO. The next one was the patent in 1995 WoundFast Pharmaceutical Inc., subsequently documenting the preparation ( isolation ) of taspin for yet more effective healing effect. The next company was Shaman Pharmaceuticals, recording its first patent in 1993, describing the method of the extraction of proanthocyanidin polymer, chemically isolated from the blood and bark that heals the infectious diseases of animals and people when respiratory virus disease, flu A,B,C and herpes simplex virus disease, citing numerous clinical experiments. Subsequently the company registered the second patent in 1996, continuing in documentacion of antiviral characteristics, usage, clinical testing and the results of the prepared extract from blood and bark C .lechleri against many virus diseases.
The researches confirmed the competence of longlife traditional usage by aboriginal medicine. It is brilliant, new, provable source from the tropical rain forest about which the users should know and use its advantages. It is useful for all kinds of cutting injuries, scratches, external scars, pimples and other dermal problems. It is applied simply directly on the stricken place. It is also very useful for easing when insect bite.North-american experts have recently found out the active effect when stomach furuncles, helcoid colitis or Crohn disease for internal usage. The internal usage is documented by south-american doctors at daily dose of 10 – 20 drops twice a day.
The professor of Münster university, Bruno Wolters, described the presence of substances of diterpenic characteristic (structure) – of corberin A, corberin B with strong antibiotic effect. Some sources talk about effect that is thousand times stronger than Penicilin V. This could be used for indicated therapy against pathogenic microorganisms resistant cultures. Simultaneously this fact evokes to discreet frequent use. The tree blood is being obtained early in the morning because after sunrise is the extraction smaller. It is being obtained from trees in the age of 10 – 20 years, the average trunk about 45 cm, from which is being obtained in average one resin gallon. The fresh resin is of an acid reaction( pH=4,3 ) for preservation it is being mixed with water or ethylalcohol in usual rate of 50 millilitres of preservative agent on 760 grams of resin. The pure resin is insoluble in water and organic solvents.

In latex was assessed the presence of substances with a strong antibiotic effect. This fact evokes to indicated usage for a limited period of time with regular doses.

The contentual substances can cause an allergic reaction for extra sensitive people.

Antiulcerous (gastric ulcer) – Dissolve one teaspoon (ca. 5 millilitres of resin in a glass of tepid water. Use the first day -one, the second day-two, the third day-three drops up to the twentieth day-twenty drops (upwardly) then keep 20 drops for 15 days and after it lower the sixteenth day – 19 drops …up to one drop (downwardly). After this treatment procedure should be the gastric ulcer completely cured. If not, after 15 days of a pause repeat the overall treatment. Antihemorhagic (antibleeding (small injuries)) – Moisten a bit of sterile wad in tresin and smear. Antineoplasic (against tumours) – Mix 5 millilitres with tepid water or another liquid, use in the first phase in the same way as against gastric ulcer for an overall purgation, after it 15 days take a break and repeatedly consume together with Uňa de Gato (uncaria tomentosa Will. D.C.) for one month and then only Sangre de Drago for another month. The treatment of varicose ulcers – Apply using a sterile wad on the stricken place. Slightly band during night and repeat. Female urogenital infections –Dissolve 20 drops in 20 millilitres of tepid water. Swallow together with food for 10 – 20 days. Complete the treatment with the tresin solution washing in water. (3 drops in a litre of water) Depurative (purgatory) treatment – Dissolve 3 – 5 drops in a little of water or a fruit juice. Use for a month, then three months of a break and after this repeat. Throat infection – Mix 5 drops in a glass of tepid water. Then gargle. Against tuberculosis– Mix 2 drops of tresin with tepid milk. Use once a day.