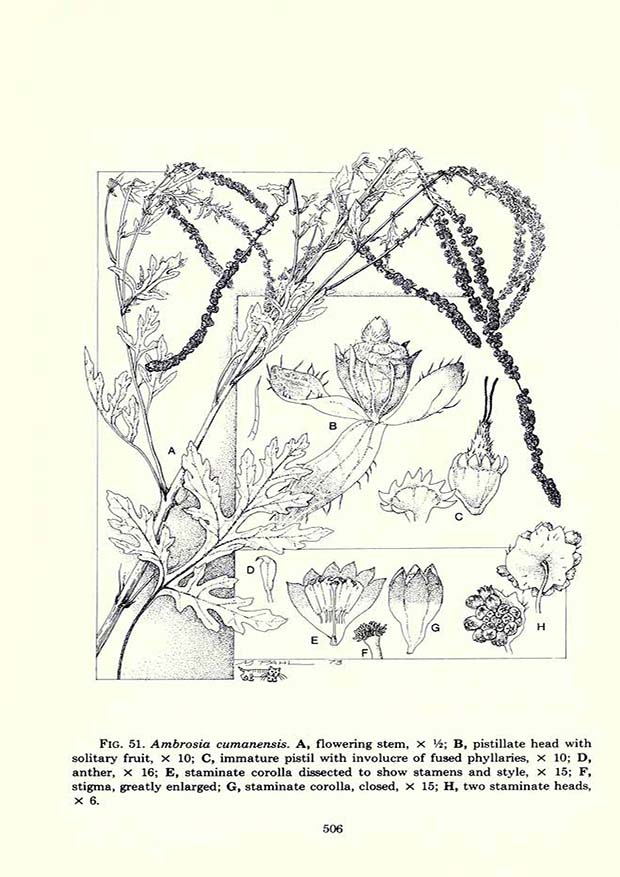 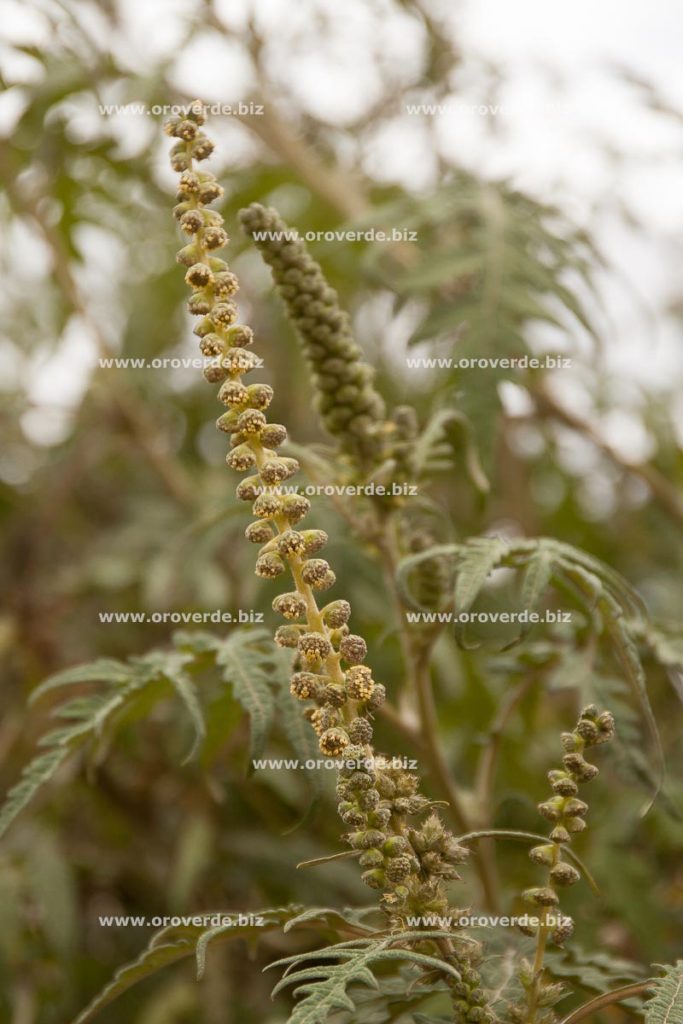 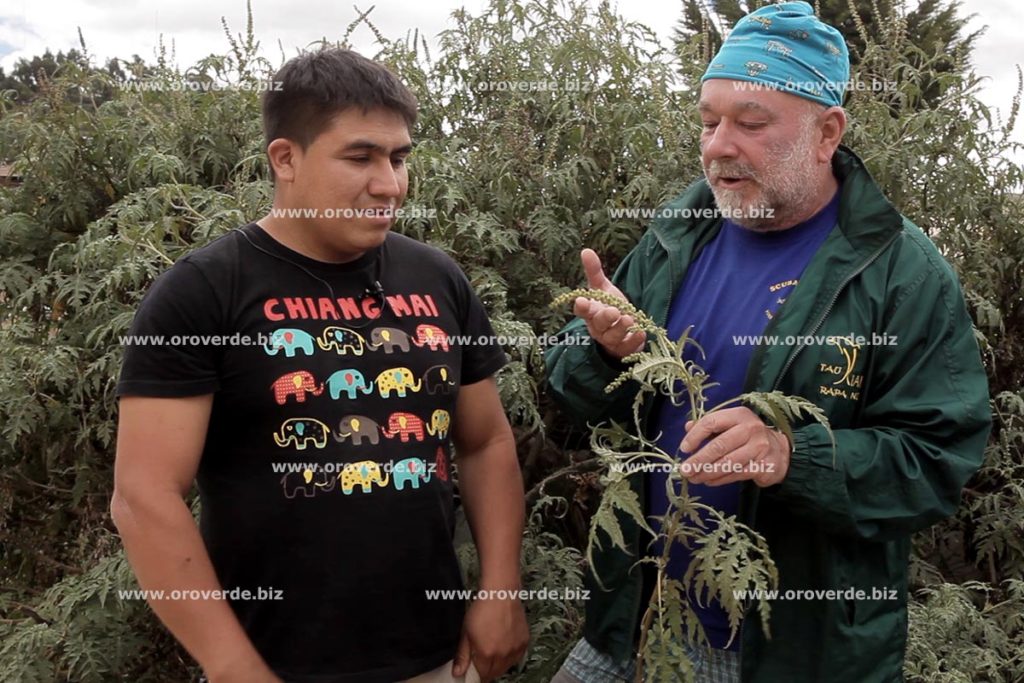 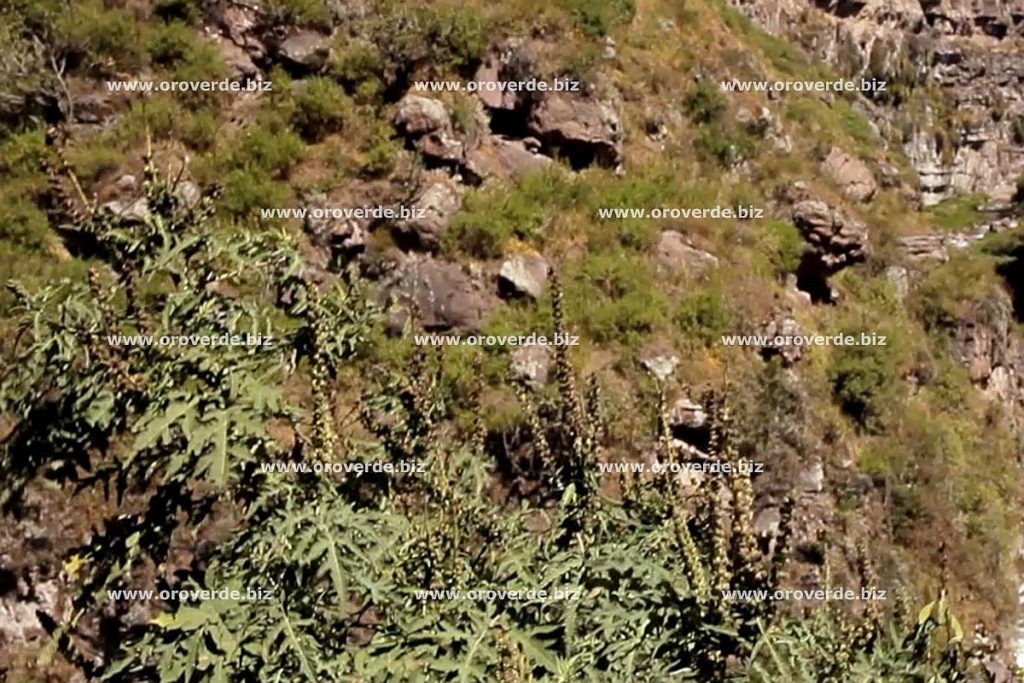 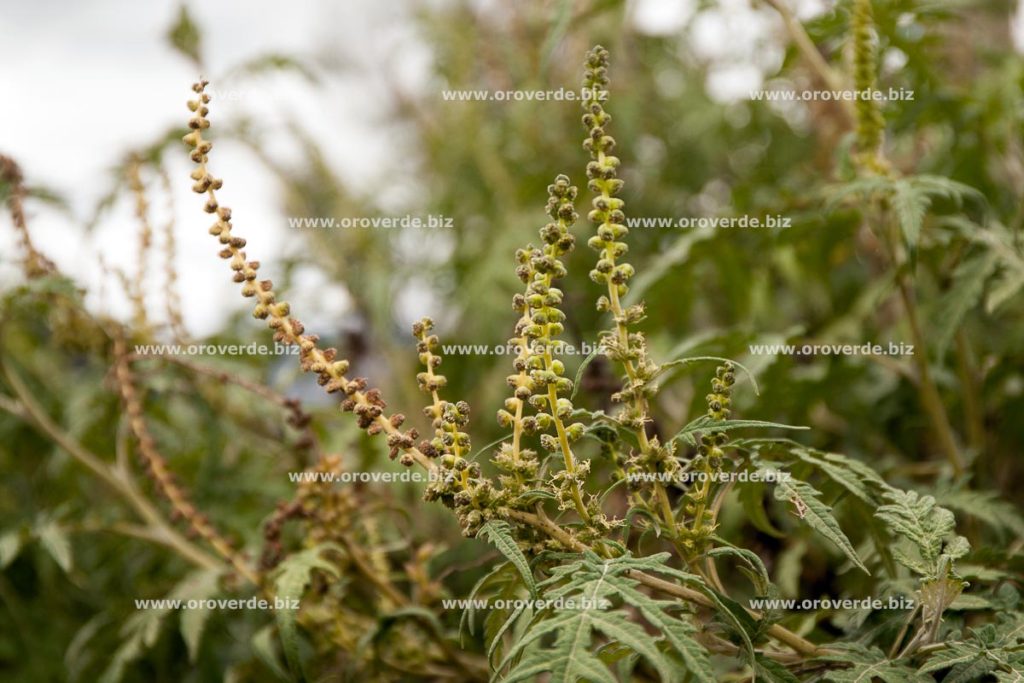 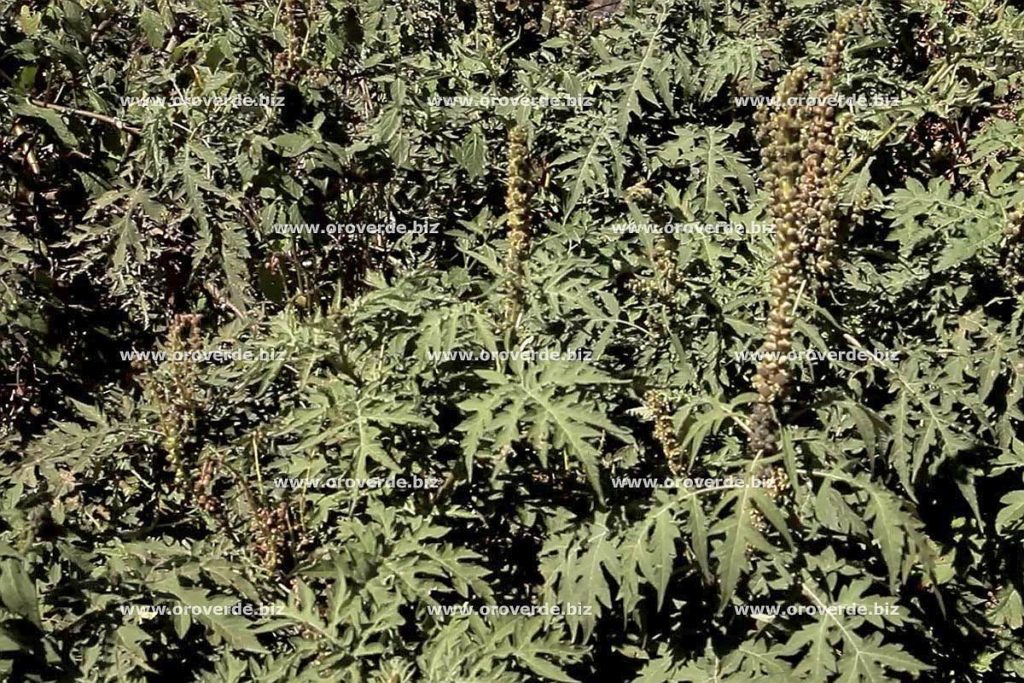 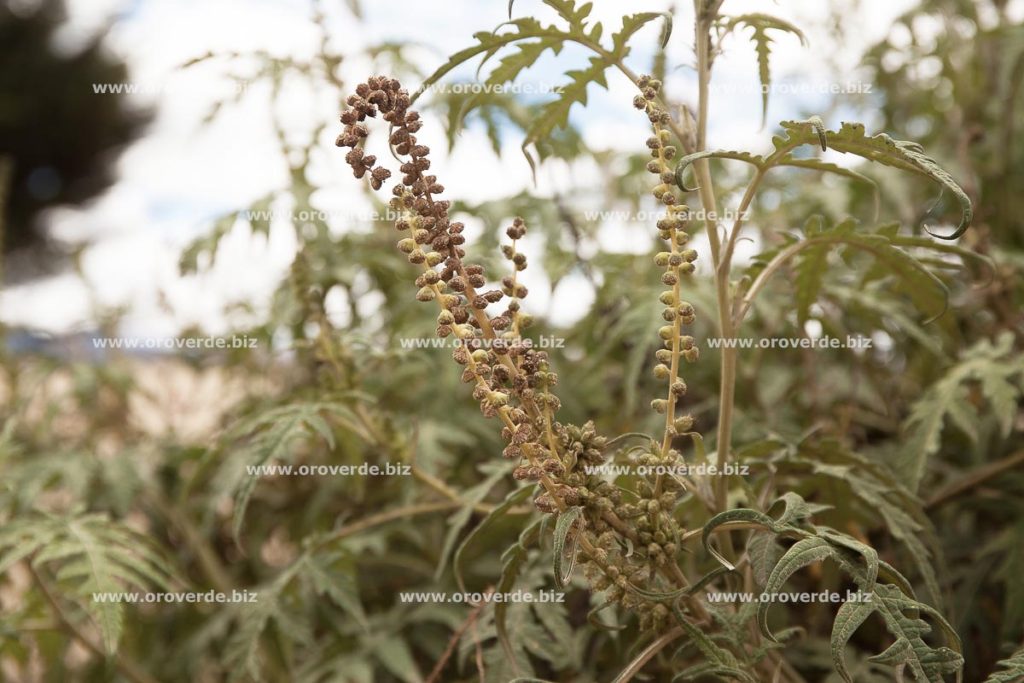 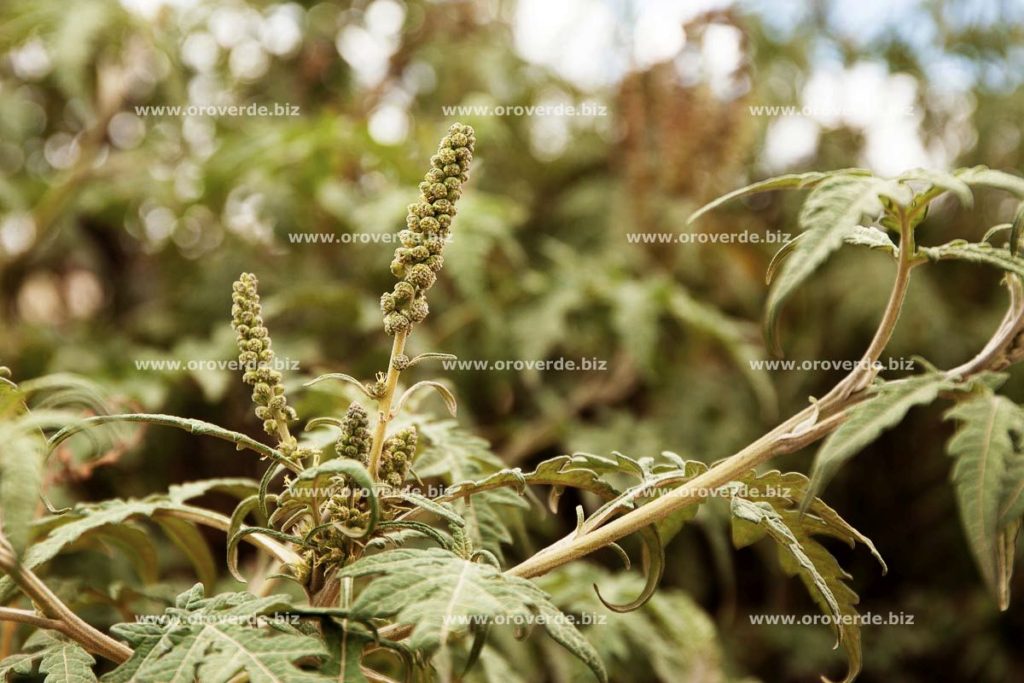 Annual herb growing as small bushes with an intensive smell-aroma. The stalk is upstanding, branched, rough on the surface; leafy up to the top, height between 50 up to 100 cm. Leaves in turns with oval contour and a sharp pike, short peduncle, simple, gently and shortly haired on the both sides, more on the reverse side. The size between 2 up to 5 millimetres in width. The blossom is bisexual, cluttering in the spikelet herringbone inflorescence. The male blossom (androceum) is created by the sterility of the female sexual blossom (gynecea). The floral corona is hollow and extended, consisting of five petals. Androceum is created by five stamens, tucked in the floral corona, having free gains and prolonged flowline. Gynocea is situated in the bottom of the inflorescence. The stigmas with bottom ovary, uniovarial, in a fibred style with two stigmatic branches, calyx reformed into a tuft of hair changing in number, shape and size. This tuft of hair is called papus and his function is to enable the transfer of the hays with seeds by wind; the floral corona is of white colour, five-edged with two pysks. The hay is of an ovoid shape, surrounded by four ledges into the pike; its length is 3 millimeters.
It often occurs as a bush on moisty and muddy river banks in coastal areas, Andean valleys and on the edge of forests. It also survives on a drier soil measurably. The occurence: in Peru (Lima): Mala, Rímac, Ocros; Ancash: Chiquián (3000 up to 3300 metres above sea level), Santa, Recuay, Nepena (2400 metres above sea level); Junín; Tarma (2700 up to 3200 metres above sea level) Ayacucho: Cora-cora (3200 up to 3300 metres above sea level); Puno: Llave, Juli, Pornata (3800 up to 4000 metres above sea level), Arequipa: Río Majes; Moquegua; San Martín; Loreto.
The plant is used by indians in the southern part of the coastal area in Peru. It was described by spanish conquistadors in the following: „ bright white flowers grow on it”; „stalk is of the long canes shape, of cindery colours, with small leaves”; „ has got warm effects, indians always carry it along and on their ways they use it for treatment of various diseases.” Used are Famous soasadas (gummed) leaves or as an ointment as anti-inflammatory and anti-rheumatic medicine and in the cases of spasm; in the cases of rheumatiz as a dye; the sauce from leaves to calm down the iritation-external on piles; fried sauce in almond oil on tummy in the cases of gastric troubles; sauce mixed with pork fat for deflating (when edemas) of the legs; leaves applied on the edemas, knowledge of the bath for soles-legs in the cases of inflammation and also as an antiseptic agent.” It is known that the whole plant can be used in the case of cough, bronchitis and asthma, if it is fed regularly. Also its effect by dezinfection and fumigation of the insect is well known. It is considered to be a bushy plant whose pollen causes the asthma seizures and seizures of corasthma.
Documented is the ethno-medicinal use when the stomach pains, as antirheumatic agents, in the cases of lowered and irregular menstruation, as antineuralgics, when nervous troubles and hysteria. At the time of Inca imperium it was used for embalmment of the dead bodies, up today it is used by medicine men of some tribes as a religious and magic plant. Described is also the usage for brandy Absint preparation.
Roth & Lindorf describes the resent researches, which results show hopeful usage for diseases moderation of the RS sort, Parkinson disease and Alzheimer disease.

The content of allergens (polyins) and photosensitisers provokes to raised attention when using by people with increased sensitivity on the contentual substances (the possibility of allergic reaction creation – pollen fevers, allergic dermitide and primary photo-allergizations).