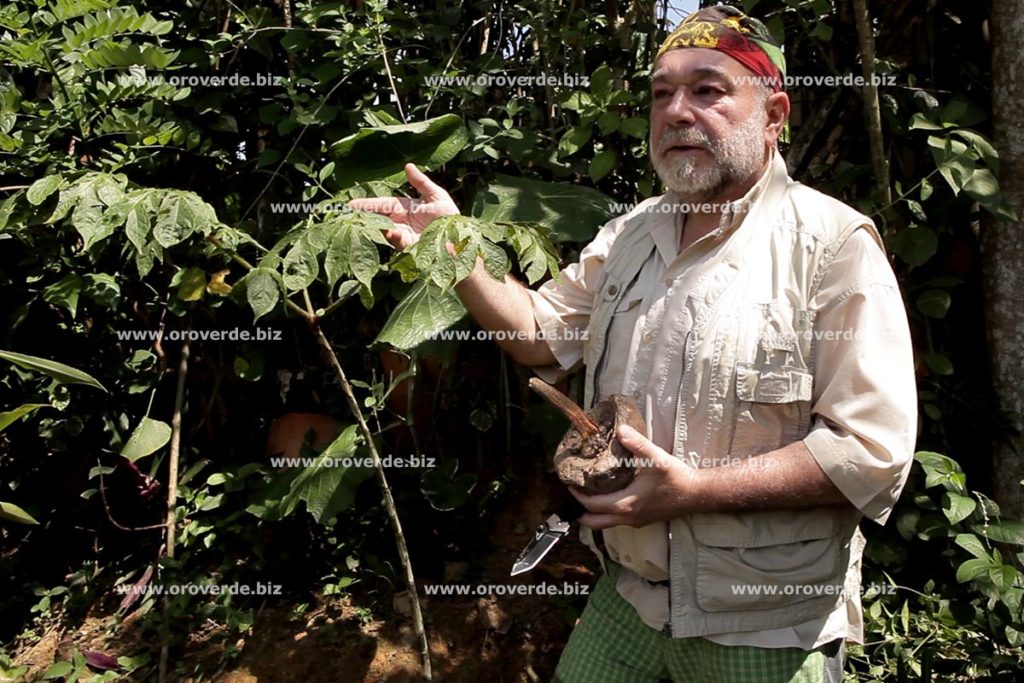 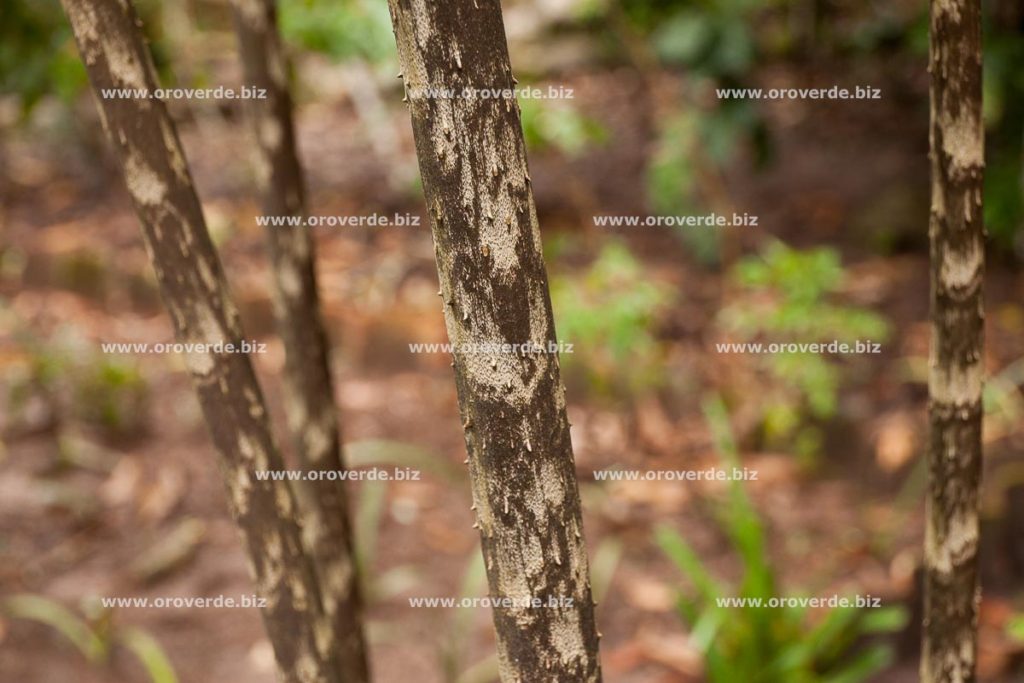 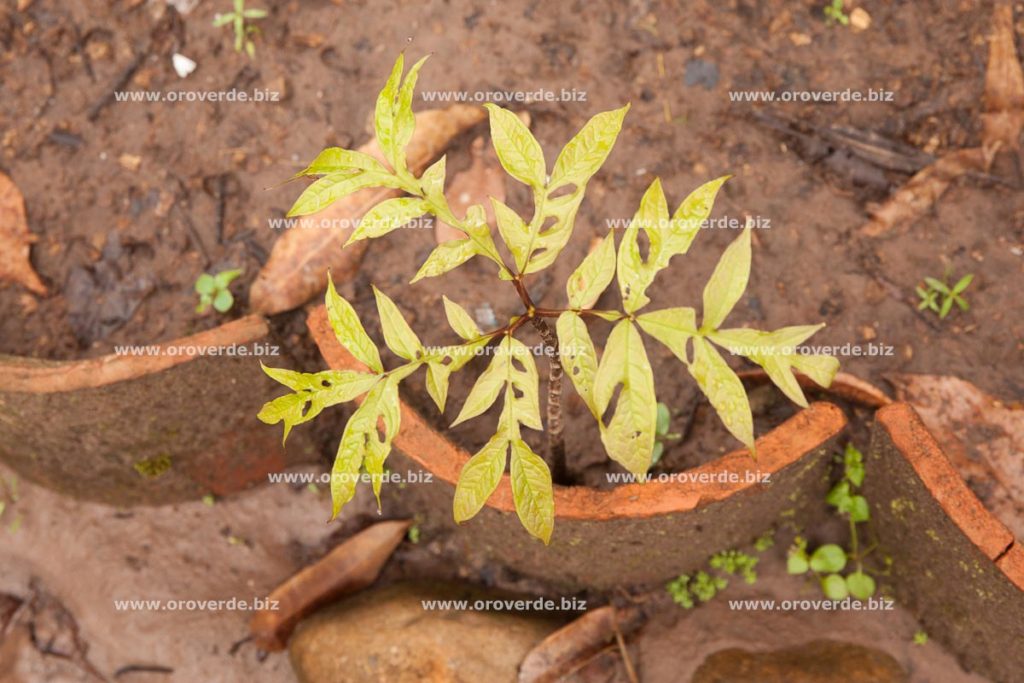 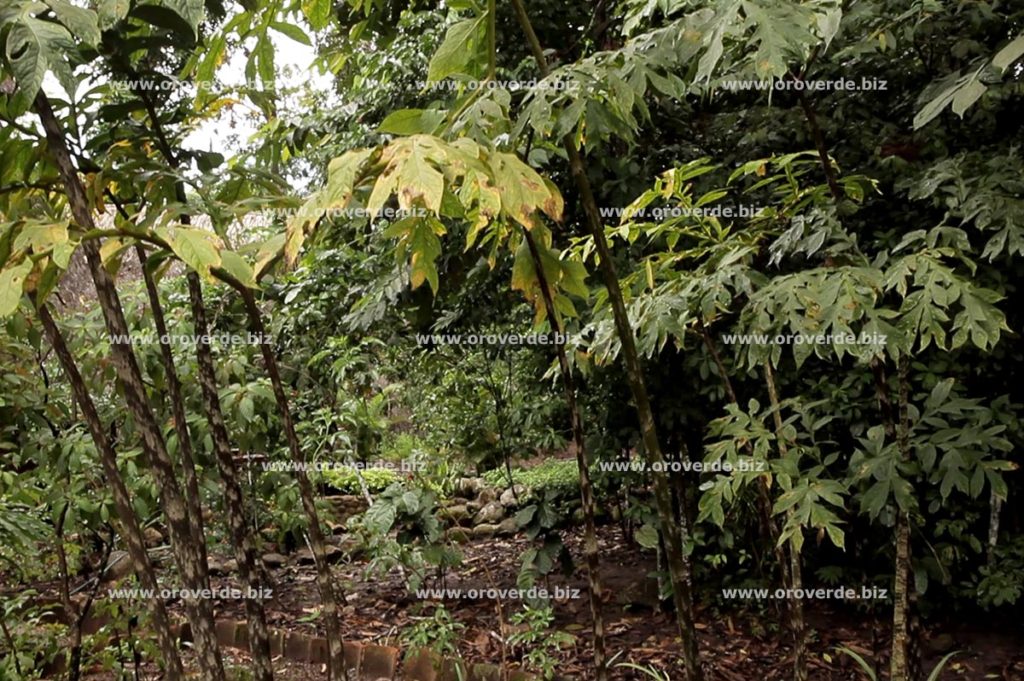 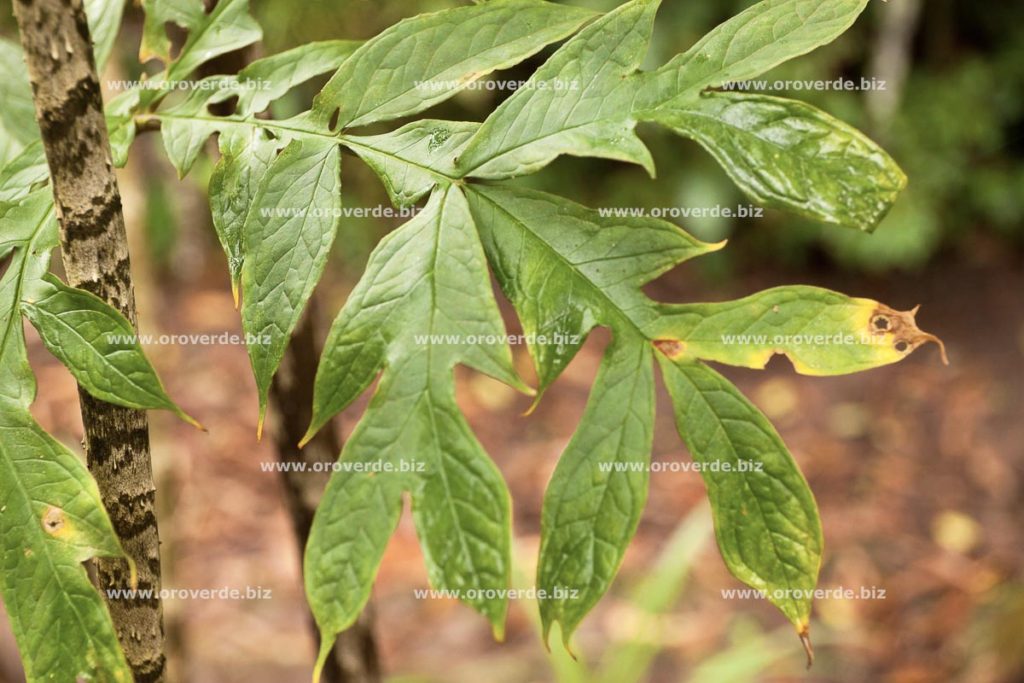 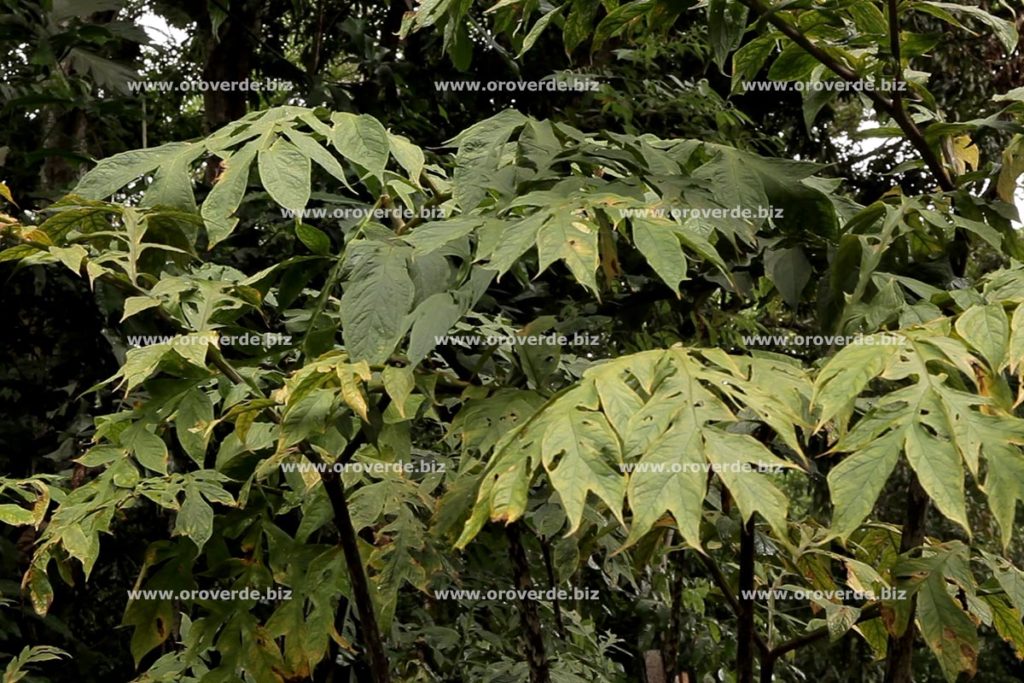 Jergon sacha is a tropical plant consisting of a sole, gigantic and profoundly divided leaf growing from an underbrush bulb on a long and thick stem reminding a trunk of a sapling. When yielding fruits, its stem grows from the plant base as high as 1-2 m. In its final phase the plant is very extensive, with a chestnut-like vulva-cyst with very bright red-orange fruits in the shape of berries overflowing with seeds inside the fleshy stem. The flower reminds of the flowers of the plants Caladium or Dieffenbachia, only it is much larger. It is considered as a perennial herb, but a herb unusually extensive – up to 2,4 m high. As many as thirteen species of dracontium can be found in the region of South and Latin America. Four of them, growing on the territory of Amazonia, are almost identical and are used as complementary remedies in the systems of herbal medicine: Dracontium longipes, D. loretense, D. peruviuanum and D. asperum. All four origin in the Amazonian virgin forest. D. asperum is however prevalent in the regions of Brazil, Surinam and Guyana; D. longipes, D. loretense and D. peruviuanum are prevailing on the territory of Peru, Columbia and Ecuador.

From the ethno botanic view jergon saccha is regarded as a „model plant”: its ethno medical use is directly adherent to the physical appearance of the plant. In this respect the body-stem and spotted colouring of jergon sacha closely remind of a poisonous snake living in the same region. In Peru and Ecuador both snake and plant are called jergon saccha. In Brazil the snake is called jararaca and the name of the plant is erva-jararaca (herb jararaca). These common names refer to a highly poisonous snake species (Bothrops), several varieties of which abound in this Amazonian region (including common species Bothrops jararaca, after which the plant was named).

Local colonists, as well as native tribes from the region of the Amazonian virgin forest, use large bulb and stool of jergon sacha as an antitoxin in cases of snakebites. In these cases the bulb is quickly sliced, put into cold water and subsequently drunk. More of the bulb is sliced and put on a banana leaf which is then wrapped over the afflicted place. The compress is changed every hour, two at most; more of the bulb is administered every 3 – 4 hours. The effectiveness of this remedy is high if it is applied instantly (within one hour at the latest) after the snakebite. In the inaccessible regions of Amazonia, where it is impossible to store frozen antitoxins against snakebites (among other reasons for the high costs), the urgent need led to elaboration of this remedy and other old recipes. Natives in Guiana also use this antitoxin in cases of insect stings, spider bites or poison darts (where the poison called curare is prepared of poisonous herb and of parts of poisonous animals, including snake poisons and batrachotoxins). Other Indian cultures believe that whipping legs and body with leaves and roots of jergon sacha will protect them against snakebite and that it repels these aliens.

The advance of jergon sacha into the system of native medicine in the South America and out of the jungle was however caused by other reasons as well. Besides the snakebites, the powder of the bulb root is used in cases of chlorosis, amenorrhoea and bronchocephalitis by Brazilian native medicine. The powder is applied locally (topically) against psoriasis and the extract (lymph) of fresh stool is applied externally on sore places of mosquito bites (it is applied directly on the spot of the mosquito bite). The broth of the whole herb is also used for baths curing gout. Jergon sacha is well known in the Peruvian system of native medicine; tablets, capsules and extracts of the stool can be found in many apothecaries specializing in natural products. It is offered as the natural remedy for patients suffering from HIV, cancerous tumours, gastro-intestinal problems, hernia (the broth is applied topically), hand tremor and for immunity system stimulation.

The interest in jergon sacha, because of its use as a remedy in combat against AIDS disease, was drawn by several news articles in Peruvian press in the beginning of the nineties. The protagonist of these articles was Dr. Roberto Incháustegui Gonzales, the chairman of the Commission for Sexually Transmitted Diseases under Peruvian Institute for Welfare (ESSALUD) in Iquitos, Peru. The media informed of surprising results which had been achieved with the AIDS patients during the experiments with extracts of these plants between the years 1989 and 1993. One of these extracts had been the extract of a stool of jergon sacha (D. peruviuanum) with antiviral effect; another extract had been made of two sprouts of Cat’s Claw (U. tomentosa and U. guianensis) as an immuno-stimulant. Dr. Inchaustegui documented that the majority of patients suffering from HIV had been finally diagnosed as negative and had returned to a normal life at average within six months after application of these extracts. Dr. Inchaustegui however has yet to compile an expert analysis of these cases into a scientific publication. The comments on his work in Iquitos with AIDS patients regularly appeared in Peruvian press in the last decade. These comments concerned not only the use of jergon sacha against HIV virus, but against other viruses, including Herpes Zoster, as well. These events unleashed unprecedented interest in this plant on the market and by the end of the nineties this interest spread and was popularized in the East Europe.

Thousands of kilograms of jergon sacha a year were lately exported to Poland, Russia and other countries. Big exports lead to increase of demand on productivity and cultivation of these plants. As the whole radical stool is part of the harvest it causes the destruction of the whole plant and the wild harvests in the tropical forest are not sustainable in the long term. For the last three years two Peruvian universities are developing new ways of cultivation consisting in re-implantation of new plants on the identical place in the rain forest immediately after the harvest. New places, such as for example former plantations of coca and deforested areas, were adapted to new markets with new programs of organic cultivation.

Despite this extensive and growing market with jergon sacha not a single clinical study describing its properties has been published. The initial phytochemical evaluation showed that the radical stool contains alkaloids, flavonoids, phenol, saponins, sterols, triterpens and starch, nevertheless none of them had ever been quantified or classified.

If its effect against snakebite utilized in the long term had been clinically confirmed it can explain its antiviral use in HIV cases as well. The latest sorts of antiretroviral remedies elaborated for treatment of HIV are called protease inhibition substances (inhibitors) (remedies prohibiting the reproduction of the HIV virus), blocking active components of HIV virus – its protease enzymes. The virus with these blocked enzymes reproduces in a „defective” way and cannot infect further cells. Contemporary (best-known) HIV therapy the „protease inhibitors” combine with other antiretroviral drugs (which attack the virus directly). The proteases are present in each cell of a live organism: they are the enzymes which digest the proteins.

It is a common knowledge that the proteases are the main components of snake and spider poisons. The place of the snakebite transforms into a necrotic area; the skin peels off because of the reaction of the strong and destructive effect of the proteases in the poison which is at the same time responsible for the contusion and swelling of the area at the moment when the proteins start to resorb into the skin and the inner tissues. The power of the proteases’ effect depends on the quantity of damaged tissue and skin in the area of the snakebite. Large quantities of vegetable mediaments were for this reason registered as efficient remedies against the snakebite (specially those which apply directly on the snakebite spot) and were as well clinically tested as natural inhibitors of proteases.

Many researchers exploring the Amazonian region in search for new chemicals and drugs are for the above mentioned reasons very enthusiastic about the research of the plants serving the native tribes as remedies against the snakebites. It is probable that Dr. Inchuastegui ran during his treatment of HIV patients across one of these natural protease substances by using jergon sacha. It is however still necessary to carry out several clinical tests which would point out the mechanisms and properties reacting against viruses and snakebites, eventually whether these mechanisms are identical.

Jergon sacha is one of the most remarkable medicinal plants from the region of Amazonian virgin forest. Its standing of the “model plant” serving for snakebite treatment is generally known and acknowledged throughout the South America. Nevertheless, without the appropriate research corroborating its phytotherapeutical use and properties, it will still take a long time until it achieves the status of a legitimate natural remedy in the “modern world”. With the increasing sales in Peru and in the East Europe, a subject, who would take up this so needed research – perhaps leading to the use and treatment in cases of vital viruses like HIV, is still waited for.

Are not mentioned. May caused change in metabolism of oxalates.

In case of the snakebite apply ground bulb on the lesion and sip the brew-up of the bulb at the same time. For antiviral effect consume 2 grams of milled bulb a day.