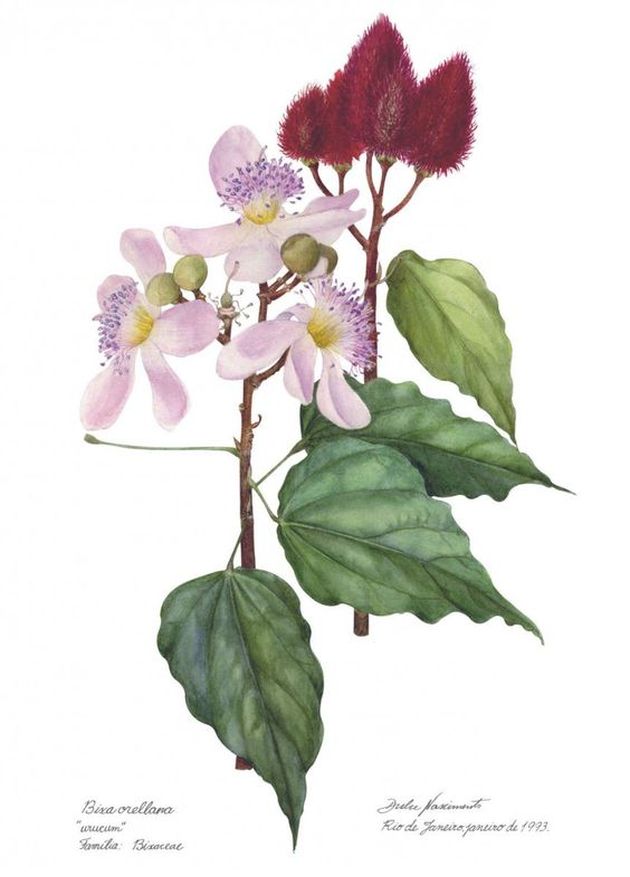 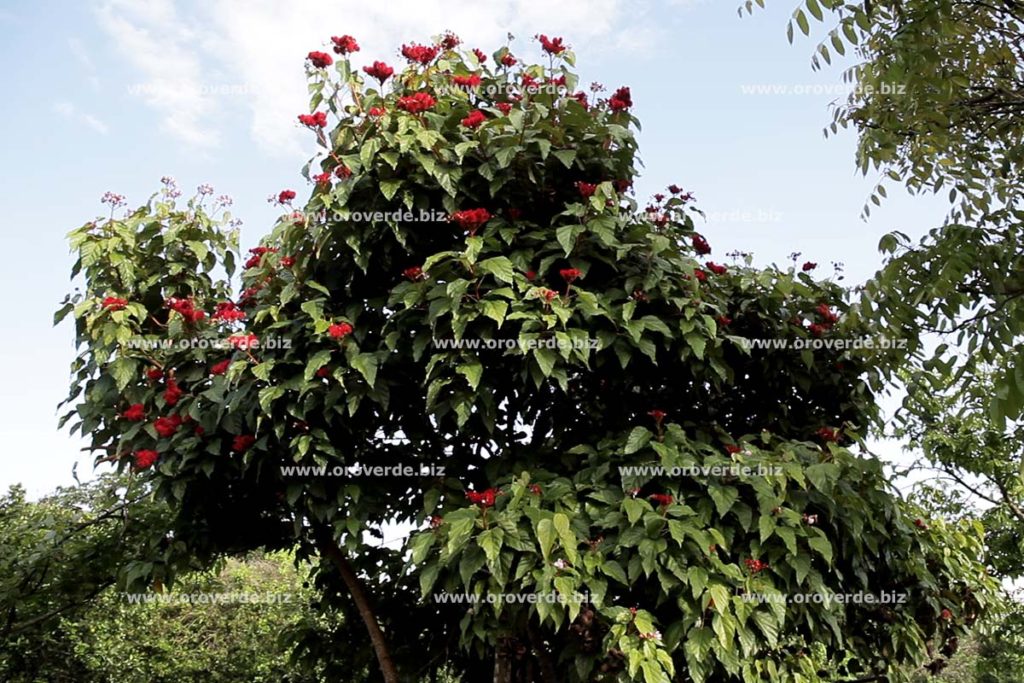 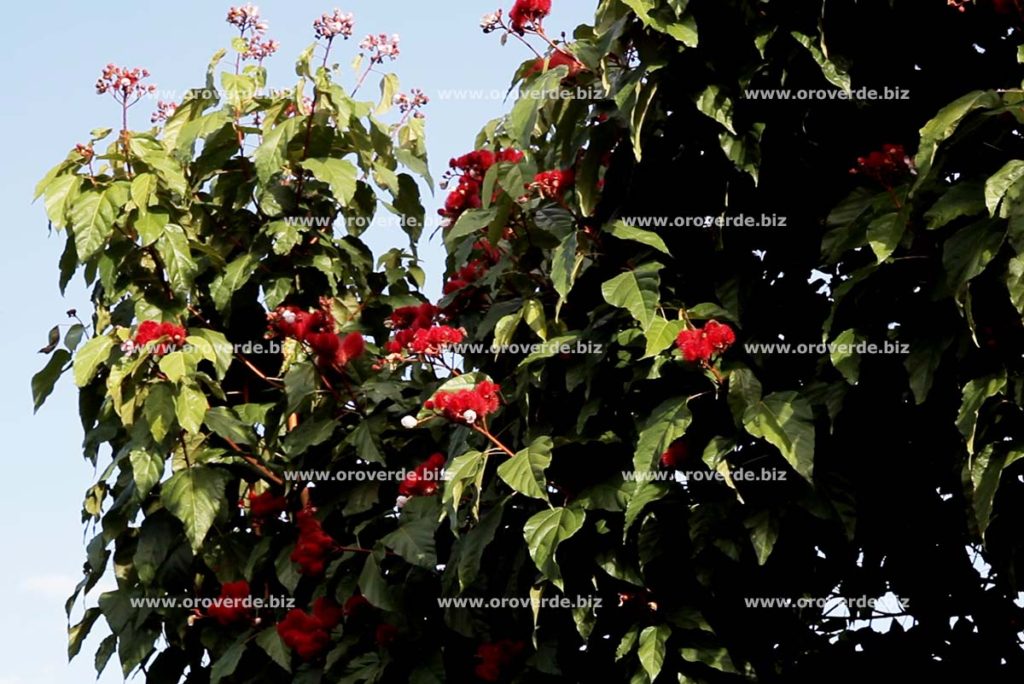 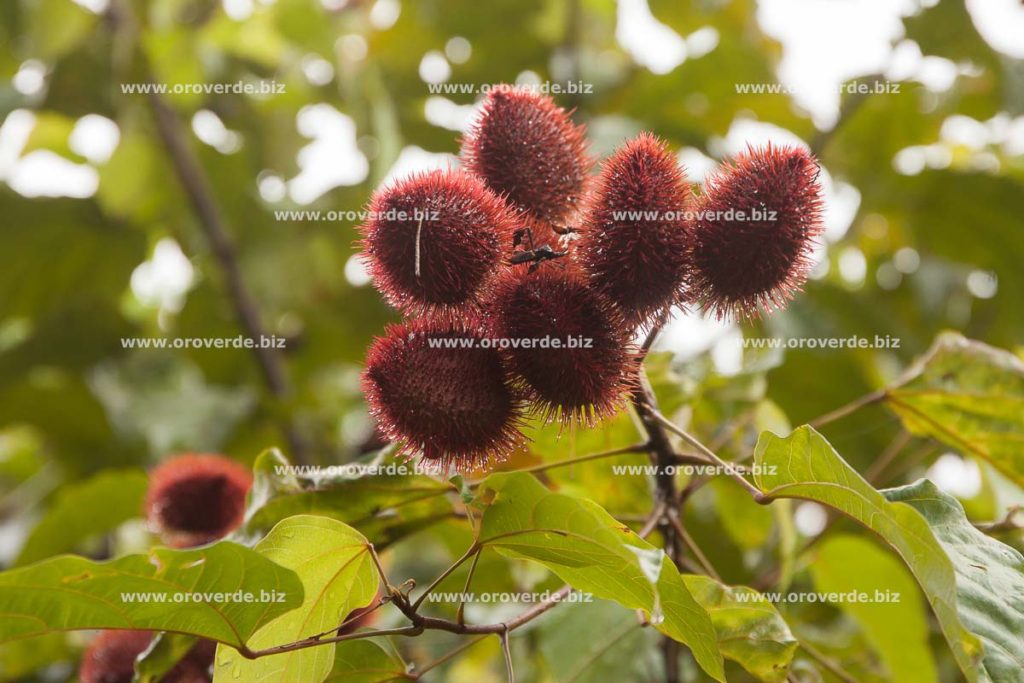 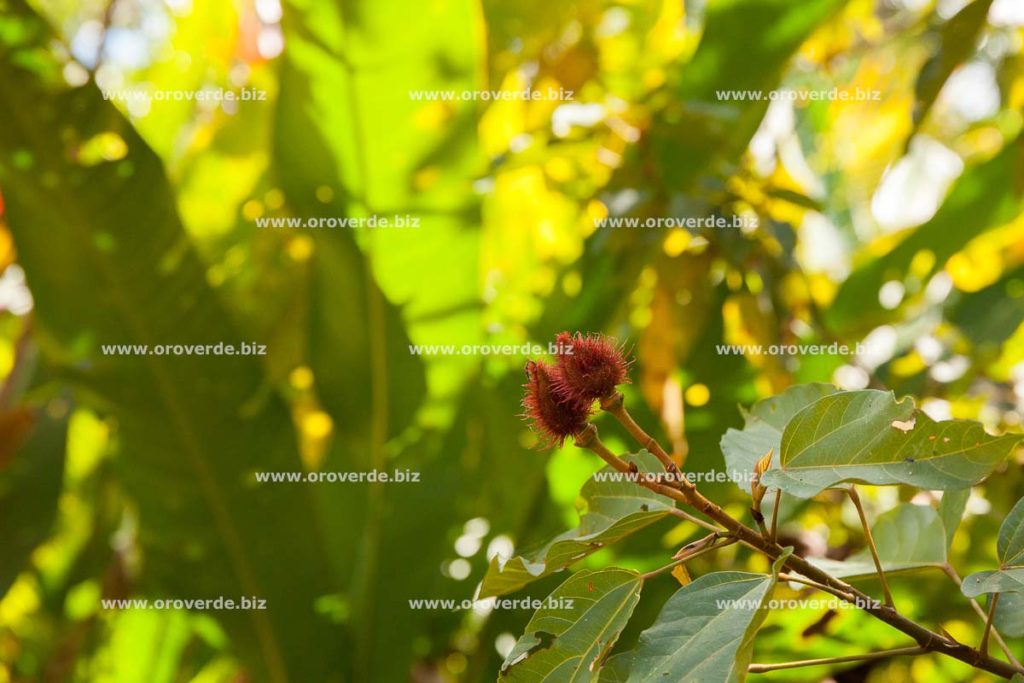 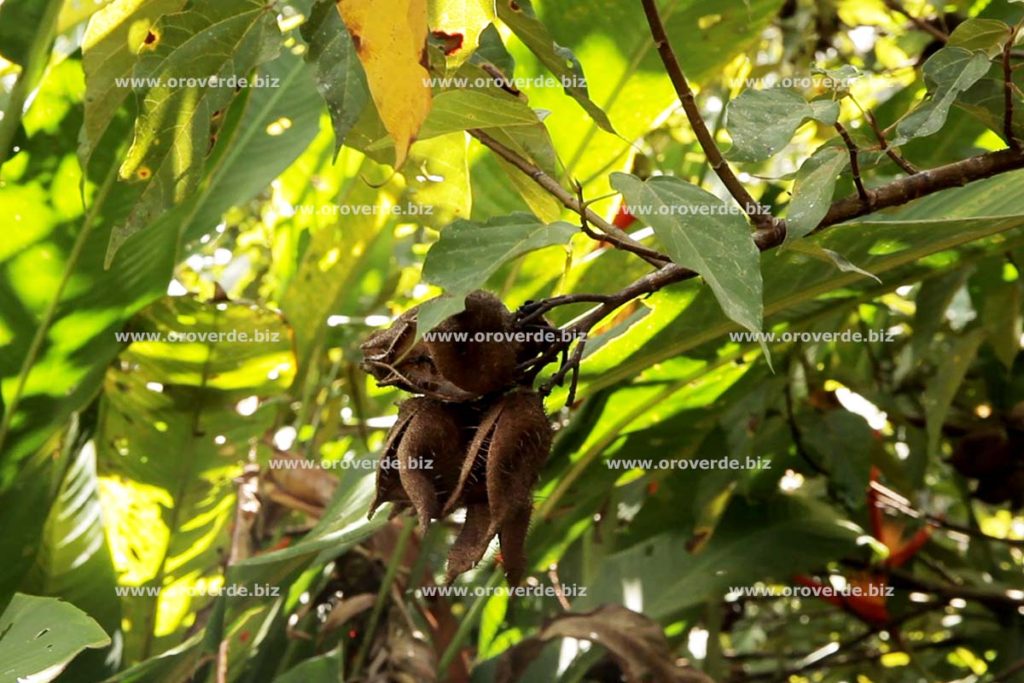 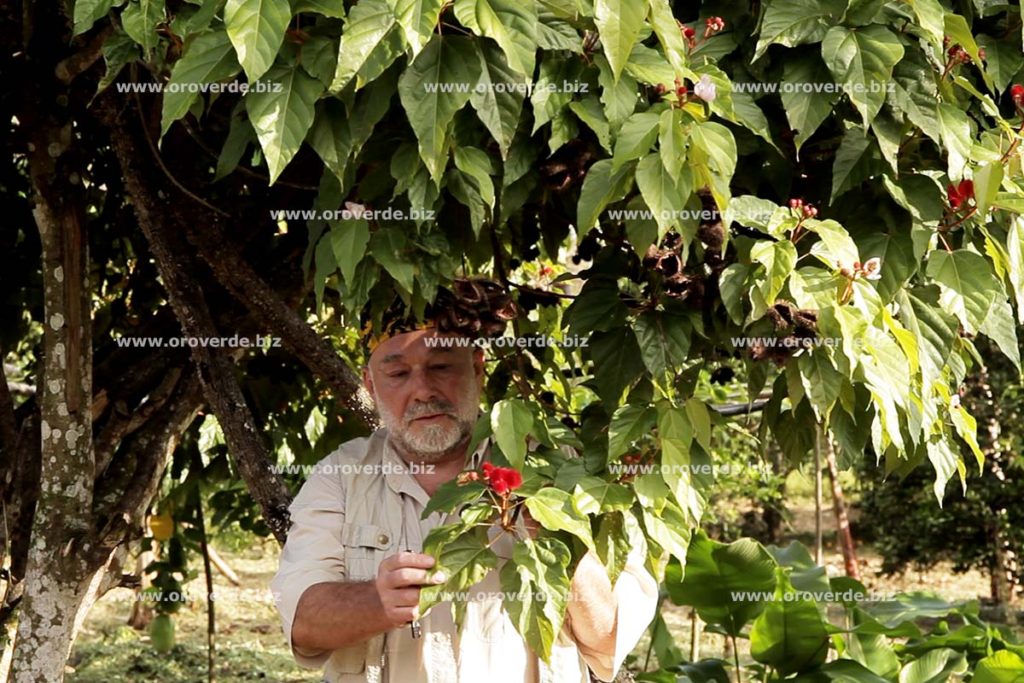 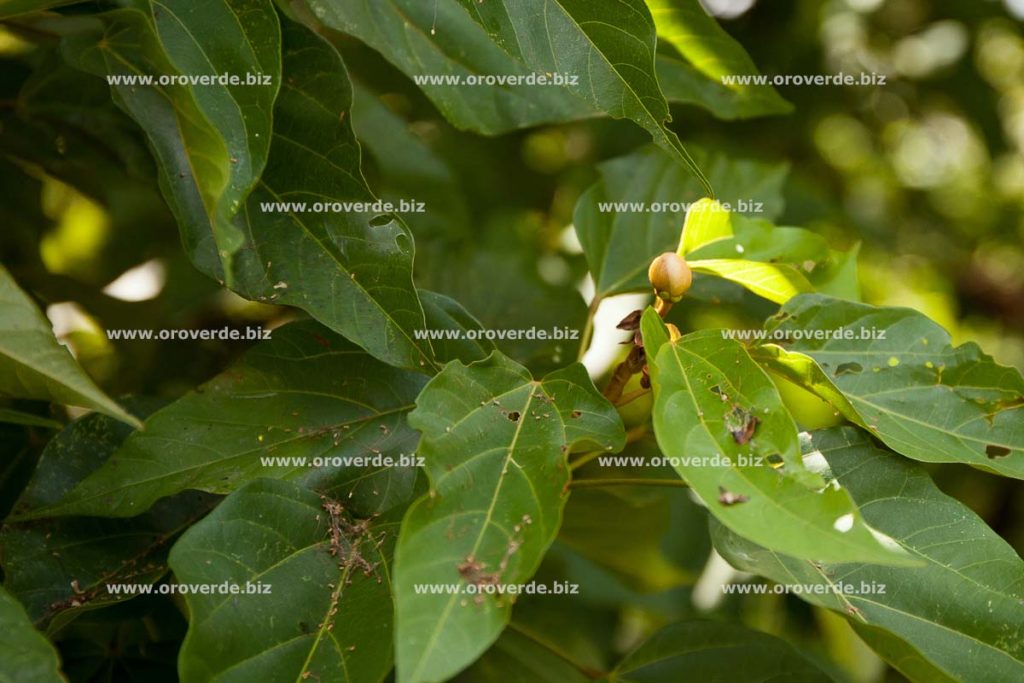 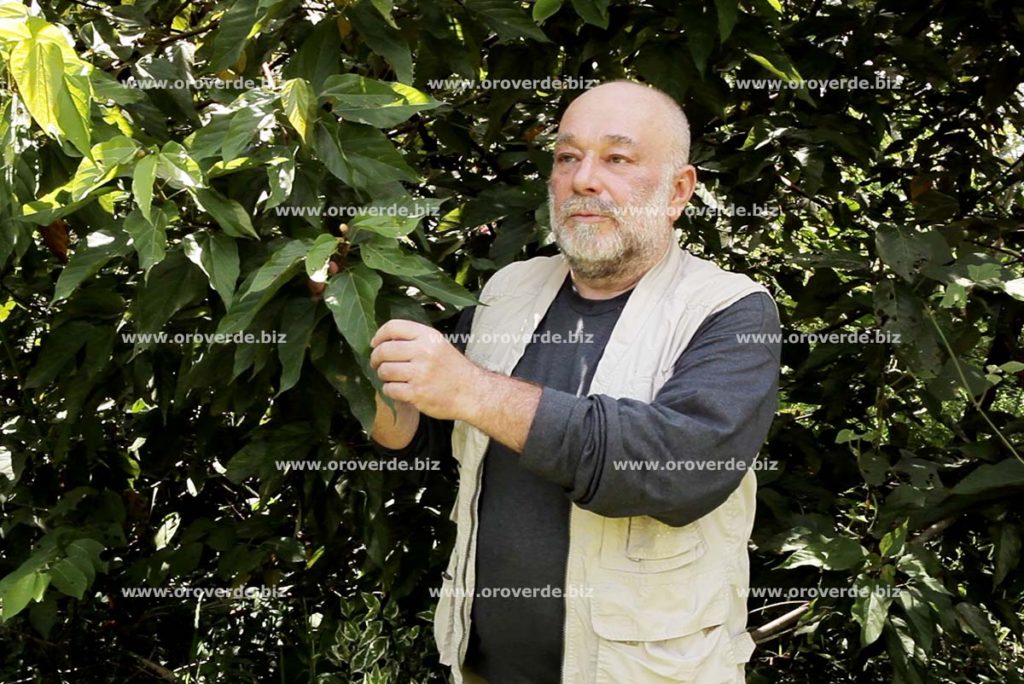 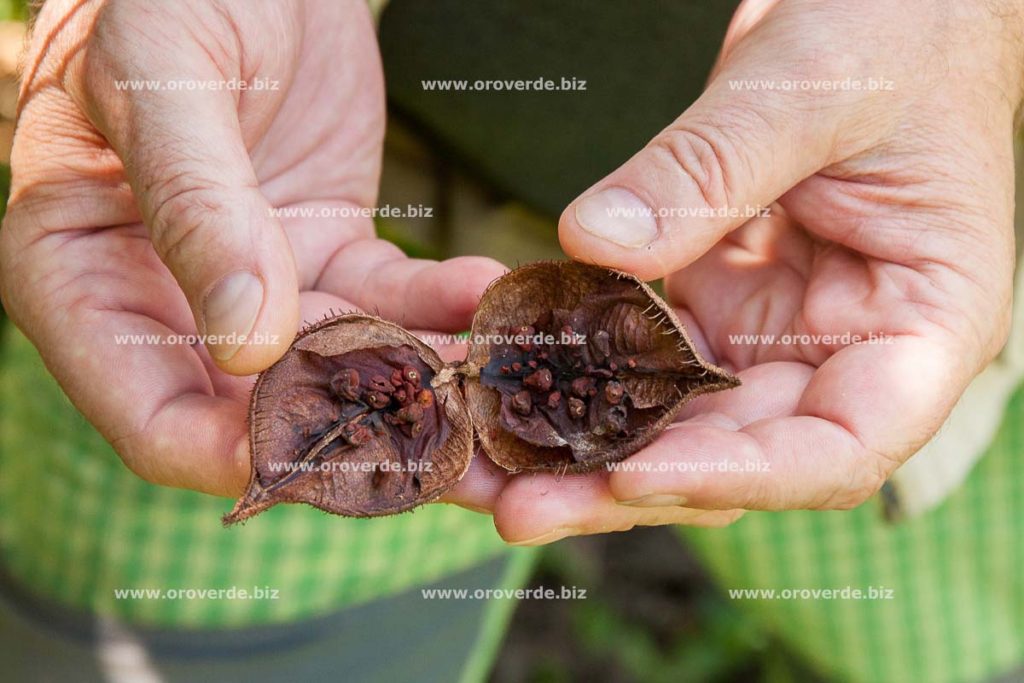 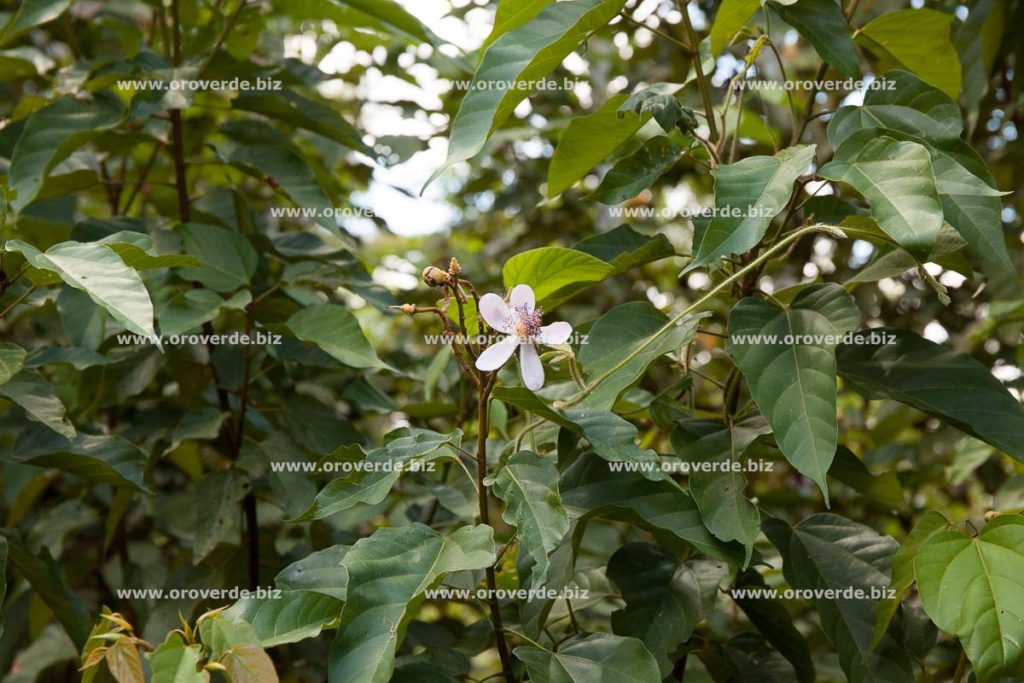 Achiote is a profusely-fruiting shrub or small tree that grows 5-10 m in height. Approximately 50 seeds grow inside of prickly reddish-orange heart-shaped pods at the ends of the branches. The trees are literally covered by these brightly colored pods, and one small achiote tree can produce up to 270 kg of seeds. The seeds are covered with a reddish aril, which is the source of an orange-yellow dye. Achiote in Spanish is known as Annato too and as urucum in Portuguese. It grows throughout South and Central America and the Caribbean and can be found in some parts of Mexico as well. Traditionally, the crushed seeds are soaked in water that is allowed to evaporate. A brightly colored paste is then made and is added to soups, cheeses, and other foods to give them a bright yellow or orange color. Achiote seed paste produced in South America is exported to North America and Europe, where it becomes a food coloring for margarine, cheese, microwave popcorn, and other yellow or orange foodstuffs. Many times, this food coloring replaces the very expensive saffron in recipes and dishes around the world. Achiote paste is also used as a natural dye for cloth and wool and is sometimes employed in the paint, varnish, lacquer, cosmetic, and soap industries.Throughout the rainforest, indigenous tribes have used achiote seeds as a body paint and as a fabric dye. It has been traced back to the ancient Mayan Indians, who employed it as a principal coloring agent in foods, for body paints, and as a coloring for arts, crafts, and murals. Although mostly only the seed paste or seed oil is used commercially today, the rainforest tribes have used the entire plant as medicine for centuries. A tea made with the young shoots is used by the Piura tribe as an antidysenteric, aphrodisiac, and astringent and to treat skin problems, fevers, and hepatitis. The leaves are used to treat skin problems, liver disease, and hepatitis. It has also been considered good for the digestive system. An infusion of the flowers is used by the Cojedes tribes as a purgative and to avoid phlegm in newborn babies. Traditional healers in Colombia have also used annatto as an antivenin for snakebites. The seeds are believed to be an expectorant while the roots are thought to be a digestive and antitussive (for coughs).

Today in Brazilian herbal medicine, a leaf decoction of achiote is used to treat heartburn and stomach distress caused by spicy foods, and as a mild diuretic and mild purgative. It is also used for fevers and malaria, and, topically, to treat burns. Achiote is a common remedy in Peruvian herbal medicine today, and the dried leaves are called achiotec. Eight to 10 dried leaves are boiled for 10 minutes in 1 liter of water for this popular Peruvian remedy. One cup is drunk warm or cold 3 times daily after meals to treat prostate disorders and internal inflammation, arterial hypertension, high cholesterol, cystitis, obesity, renal insufficiency, and to eliminate uric acid. This decoction is also recommended as a vaginal antiseptic and cicatrizant, as a wash for skin infections, and for liver and stomach disorders. Curanderos in the Peruvian Amazon squeeze the juice from the fresh leaves and place it in the eye for inflammation and eye infections, and they use the juice of 12 fruits taken twice daily for 5 days to “cure” epilepsy.

Much has been done in the laboratory validating annatto’s traditional uses and offering new ones. A water extract of the root demonstrated hypotensive activity in rats, as Peruvian herbal systems have practiced. The same extract demonstrated smooth muscle-relaxant activity in guinea pigs and lowered gastric secretions in rats, which helps to explain its use as a digestive aid and for stomach disorders. Achiote seed extracts have been documented to raise blood glucose levels in some species of animals and to lower it in others. Achiote leaves were reported in yet another study to possess aldose reductase inhibition actions – a process implicated in the advancement of diabetic neuropathy. A 2000 study confirmed the effectiveness of a leaf-and-bark extract at neutralizing hemorrhages in mice injected with snake venom,6 as has been practiced in Colombia for many years. Achiote demonstrated antigonorrheal activity in a 1995 study, and in other research, flower and leaf extracts demonstrated in vitro antibacterial activity against several bacteria including E. coli and Staphylococcus. This can certainly supports its use in traditional medicine systems for gonorrhea and other types of infections.

Analysis of achiote seeds suggest that they contain 40% to 45% cellulose, 3.5% to 5.5% sucrose, 0.3% to 0.9% essential oil, 3% fixed oil, 4.5% to 5.5% pigments, and 13% to 16% protein, as well as alpha- and beta-carotenoids and other constituents. Achiote oil is extracted from the seeds and is the main source of the pigments bixin and norbixin, which are classified as carotenoids. Bixin is used as a colorant in foods, is believed to have UV protection capabilities, and has shown antioxidant and liver protective properties.

Although its history of use as a food coloring is well established worldwide, current trends show that it is used increasingly in body care products. Achiote oil is an emollient, and its high carotenoid content provides beneficial antioxidant properties. In body care products, achiote oil provides antioxidant benefits while adding a rich, sunny color to creams, lotions, and shampoos.

Although not widely available in the United States, standard decoctions of achiote leaves are taken by the half-cupful 2-3 times daily for prostate and urinary difficulties as well as high cholesterol and hypertension. Ground achiote seed powder is also used in small dosages of 1-20 mg daily for high cholesterol and hypertension. Higher dosages can cause a marked increase in urination. It has been noted that some individuals are highly sensitive to achiote seed and this diuretic effect can be caused at much lower doses, even by just eating a bag of popcorn in which achiote was used as a coloring or flavoring ingredient.

For all above mentioned ailments the whole above-ground part of the plant is used. Make infusion of 5 grams in one litre of water, drink a cup 3 times a day.