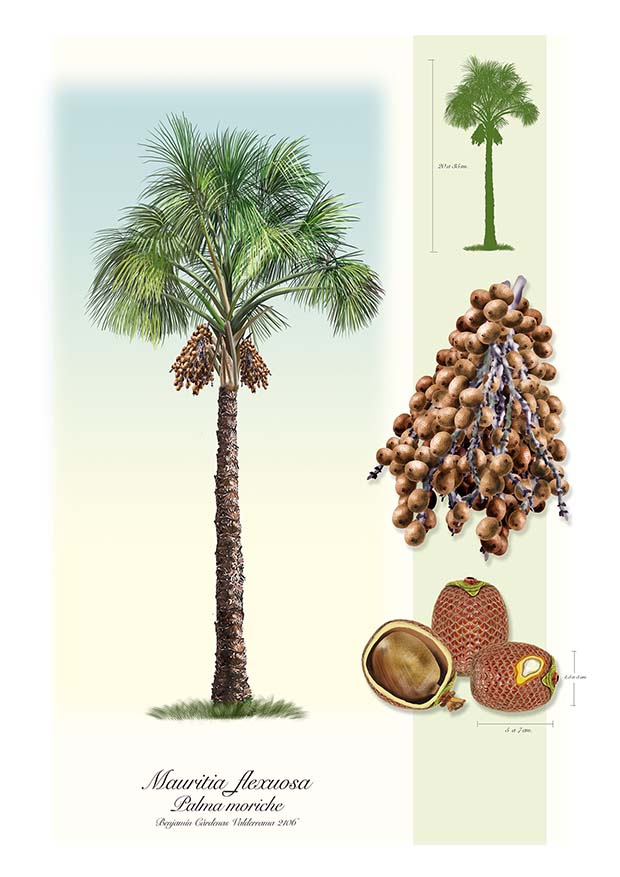 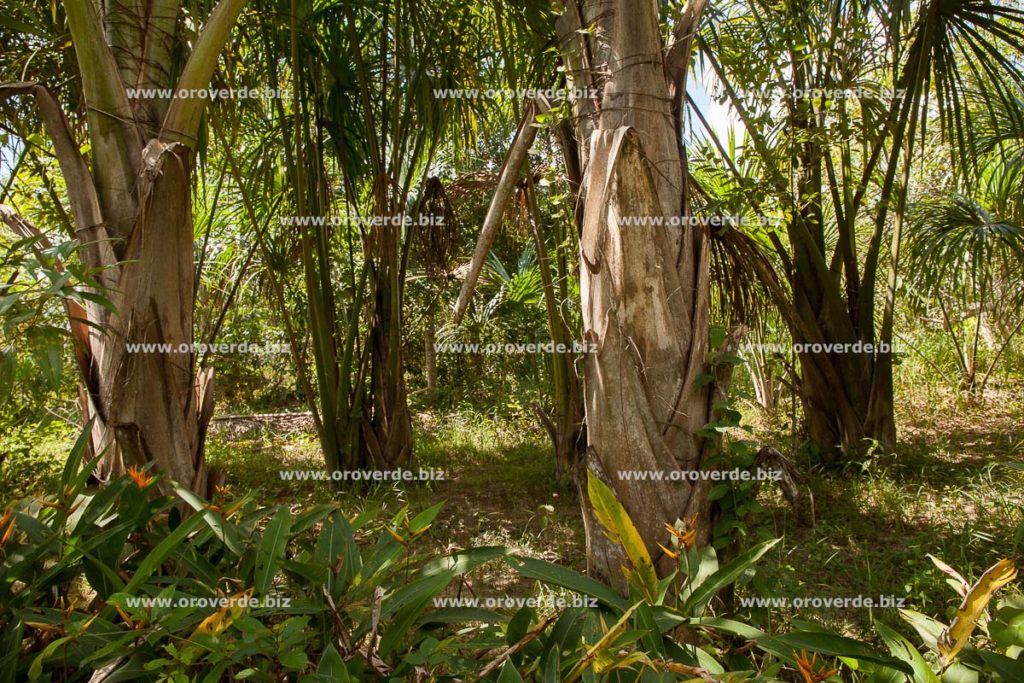 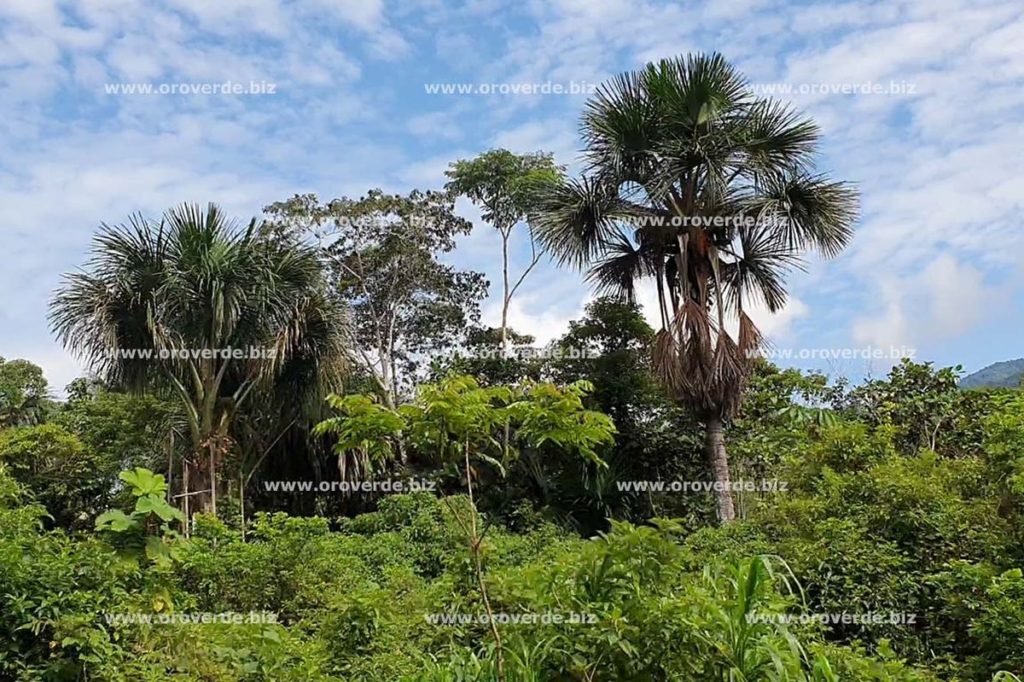 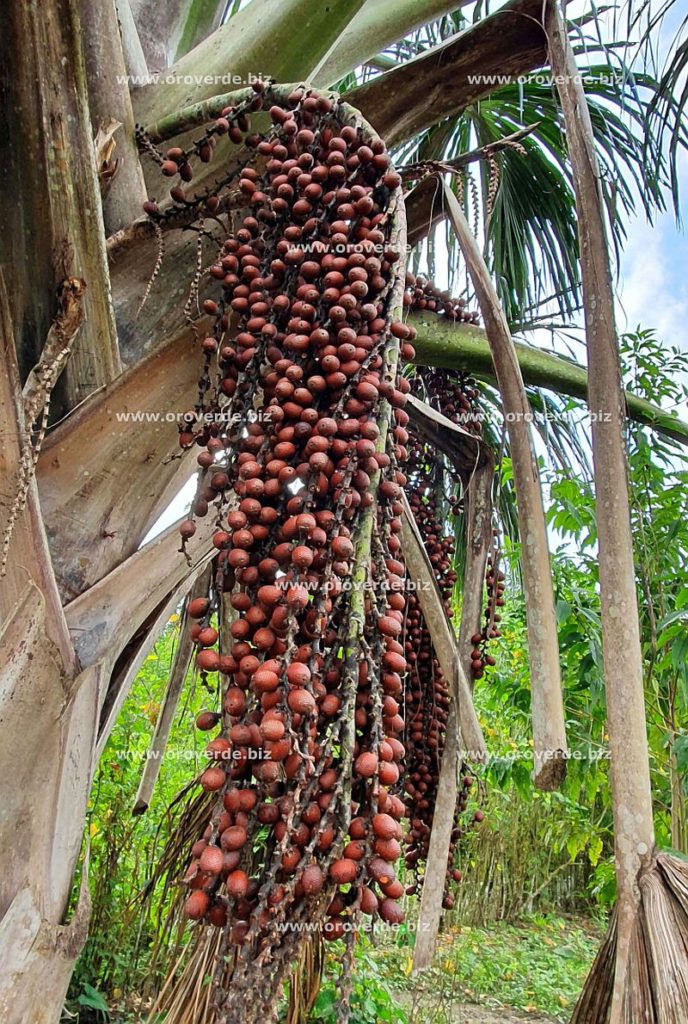 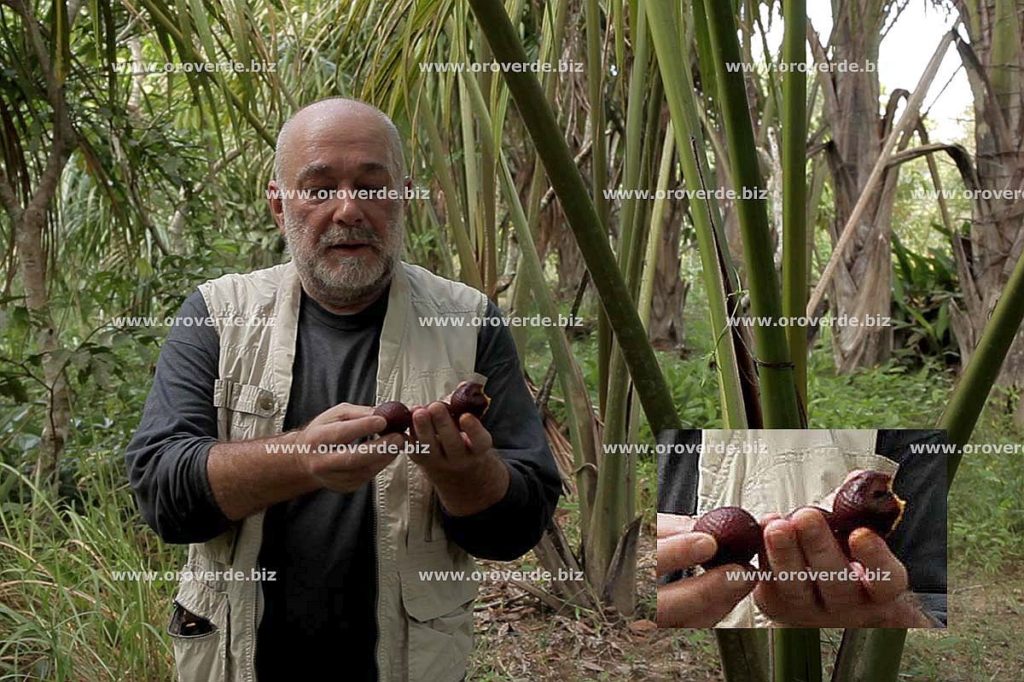 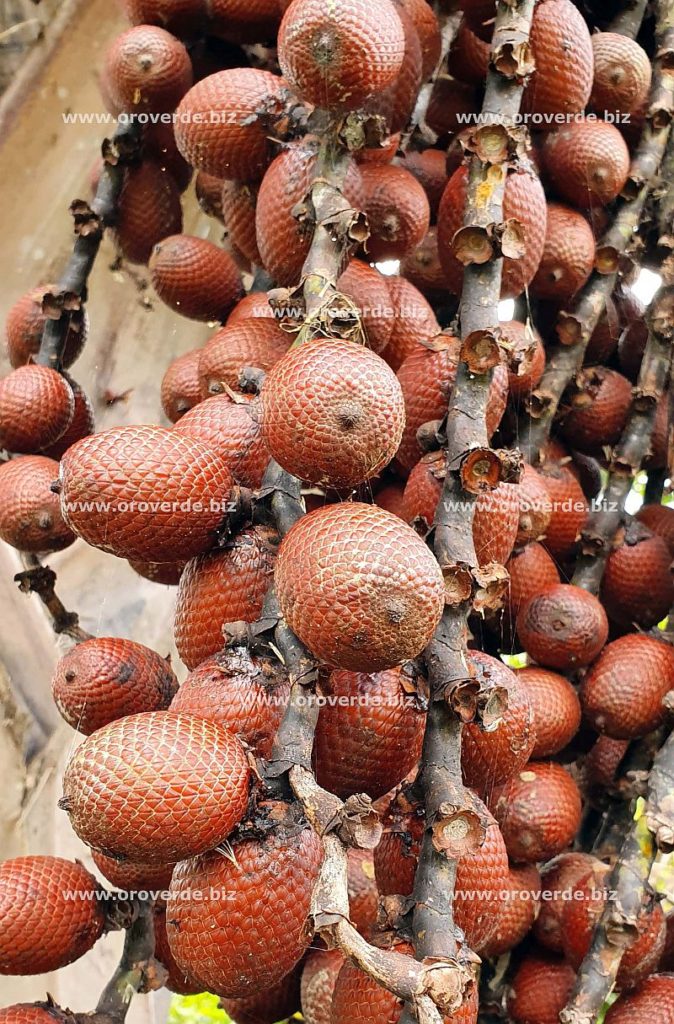 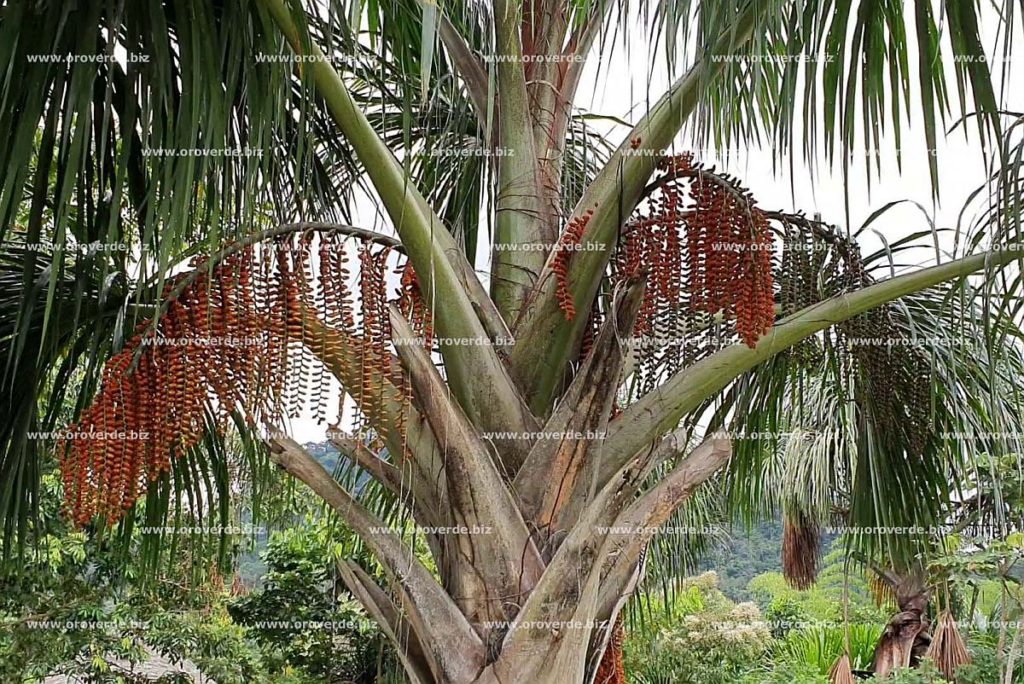 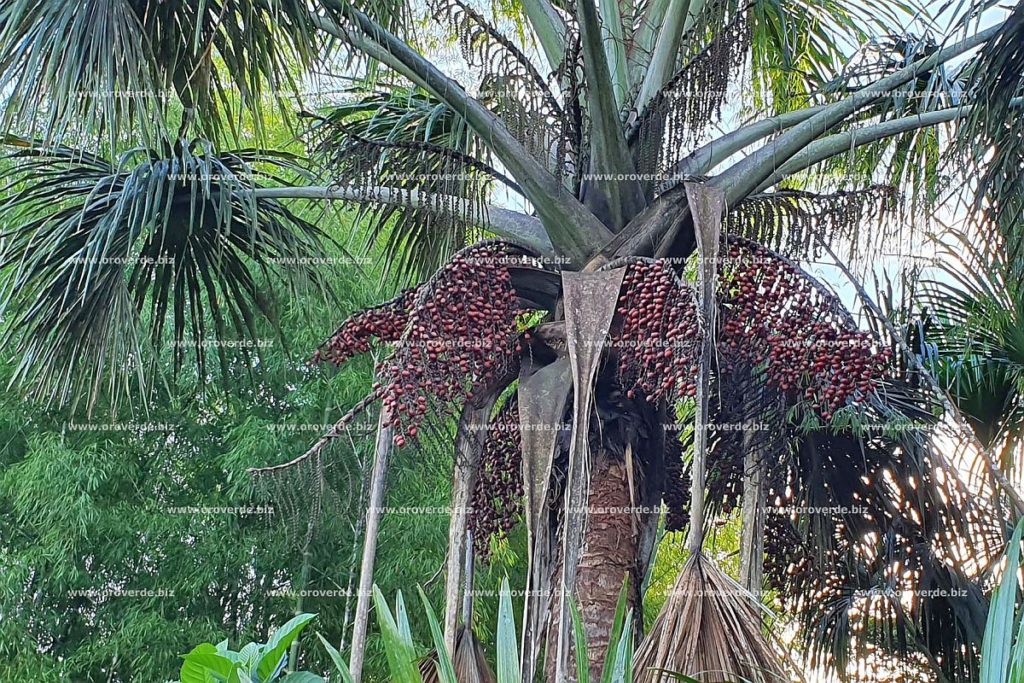 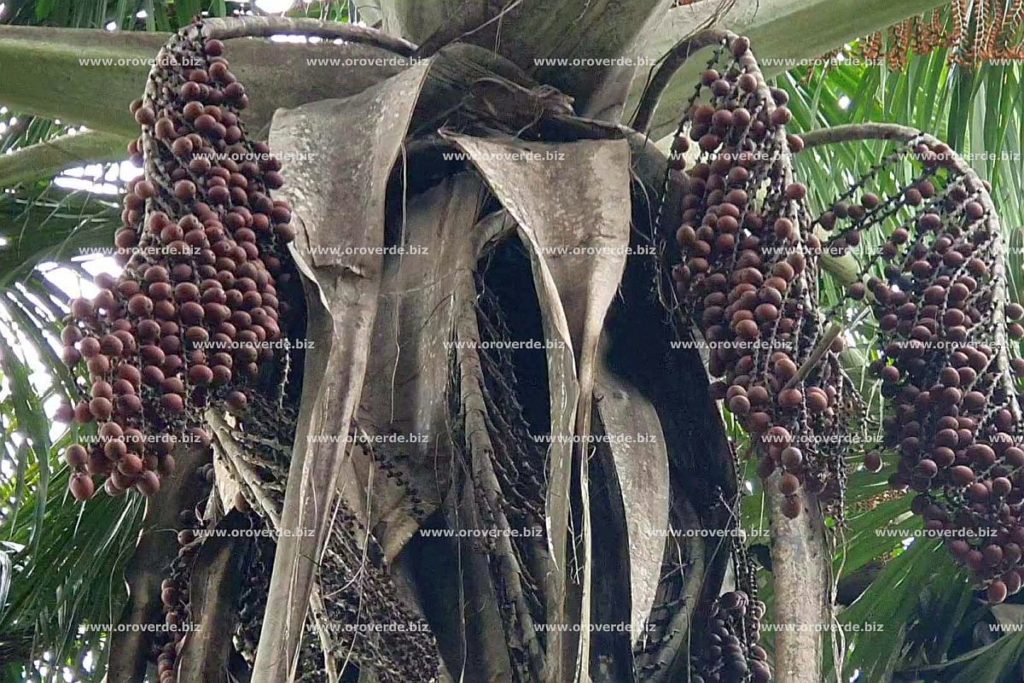 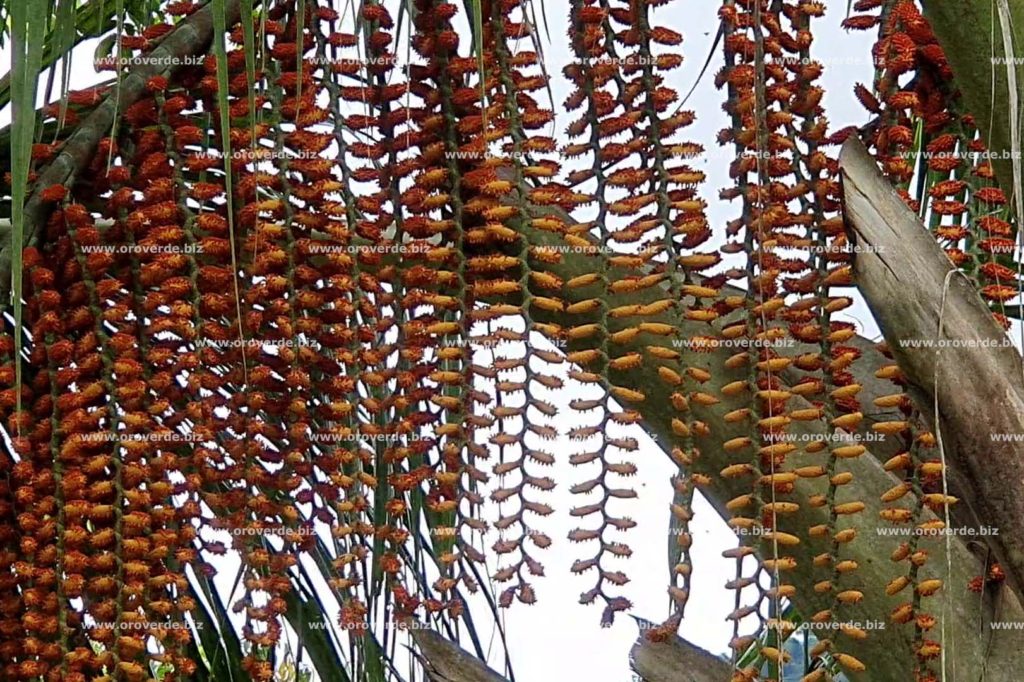 The aguaje palm (the indigenous names aguaje, moriche, morete, palm ité, buriti) is one of the most widely used multi-purpose palms in the tropical rainforest of South America. He prefers permanently or at least periodically flooded localities, mostly occurring here in groves and stands called aguajal (read aguachal). It grows freely, due to its popularity it is often grown. In the productive age, which begins 7-8 years of life of the palm tree, the harvest is between 20-28 tons per hectare per year, while the life of the palm tree is around 45-50 years.
It is very popular among the natives of  Amazonia, and in reverence, it is not for nothing that they call it the “sacred palm of life”.
It is a polygamously dicotyledonous tree from the areca family (usually referred to as palms), ie it forms separate individuals with male, female or also bisexual flowers. The crown is spherical, in natural conditions it usually grows to a height of 10-30 m, often but also up to 60 m. The trunk is straight, columnar, smooth whitish gray in the lower and greenish in the upper part, with indistinct rings on fallen leaves, diameter 35 – 60 cms. The primary roots grow to a depth of 60 cm and then branch horizontally up to 40 m in length. In addition, they form secondary aboveground pneumatomorphic roots that allow nutrition in hydromorphic conditions.
From the top of the trunk grows on arched curved petioles 10-20 palmately pinnate, 5 to 6 meters long leaves. The deeply grooved petiole of dark green color grows up to 4 m long. The 1-2 meter long leaf spindle is divided into 110 – 130 narrow blades on the upper side of dark green and on the lower side of light green color. The leaf blades are bifurcated at the end, which creates a spatial impression.
Male and female inflorescences have the same size and shape, they are interfoliary (ie they grow from the axils of wooden leaves). They form 25-40 side branches and grow to 2-3 meters in length. 2-8 inflorescences grow from the crown of the tree in this way.
Triple flowers are relatively small, male significantly larger than 10 x 7 mm, growing in pairs, in contrast, female flowers only 2 mm long. Pollination is provided mainly by insects and bees, sometimes there is also pollination by the wind. Outside the flowering period, it is not possible to distinguish between male and female individuals.
The fruit is a variable spherical or ellipsoidal single-seed stone (similar to a hen’s egg) 5-7 cms long and 4-5 cms in diameter, weighing 40 to 85 grams. The outer layer (epicarp) is scaly, hard, dark red to brown in color. The middle layer (mesocarp) is starchy oily, yellow, yellow-orange to reddish in color, only 4 to 6 mm thick. This layer is edible. It makes up 10-21% of the fruit’s weight. The inner layer (endocarp) directly enclosing the stone is mucous. The stone is very hard and makes up 40-44.5% of the fruit’s weight. One inflorescence develops a grape-shaped fertility that weighs up to 40 kg. On average, one tree produces 100-200 kg of fruit per year. The trees begin to bear fruit at about 8 years and the productive age is between 40-50 years.
With its habitat, it ranks among the skeletal trees of the upper middle floor of the tropical rainforest. The palm tree and the multiplicity of uses were described as early as 1846 by the Czech botanist J.S. Presl, “The tree itself feeds on the outflow of the Orinoco River by the unconquered Guarani people, who know how to spread from one trunk to another the river is flooded, they live like monkeys on the tops of trees. These raised dwellings are partly covered with clay. Women light a fire on them for domestic needs, and wandering on the river at night they swim, they see the flames fluttering to great heights. ”This are the words of a Czech botanist, to whom botanical specimens from his travels in the Amazon were sent by a friend Berchtold von Ungarschütz.
The fruit is used for consumption, specifically its flesh. Although it is not easy to remove a scaly shell similar to a shell without damaging only a few millimeters thick flesh, the fruits of aguaje are very popular with the natives. It is estimated that in the Peruvian city of Iquitos alone (about 400,000 inhabitants), about 20 tonnes are consumed per month.
It is sought after especially by women who have experience with the effect of fruits on the formation of the female figure. Thanks to the content of phytoestrogens, the level of female sex hormones is harmonized, and this is reflected not only in the correct distribution of subcutaneous fat, so the fetus “shapes” the female figure into graceful curves.
Various studies demonstrate and clarify the important place of agua fruit in the diet of the Amazon natives. The fruit is rich not only in the content of unsaturated fatty acids, it also contains a high content of tocopherols and carotenoids, the highest of which is ß-carotene, a precursor of vitamin A. It is converted to the target metabolite, vitamin A with the highest efficiency the presence of lipids that promote absorption in the small intestine, the fetus primates in the content of an effective source of provitamin A, without the need for further modifications. According to various sources, aguaje fruits contain up to 10 times more ß-carotene than Daucus carota root, ie carrots.
A study conducted in 2013 with aguaje oil (oil extract) showed antiplatelet activity and the prevention of plaque formation in the vessel walls, which was comparable to aspirin.

You can read the Brazilian studies performed on the ingredients, proving the unique composition of the Mauritia flexuosa fruit here: b α -TE = Equivalent of α-tocopherol Contraindications: Consumption in large quantities is not recommended for men

Side effects: Not described