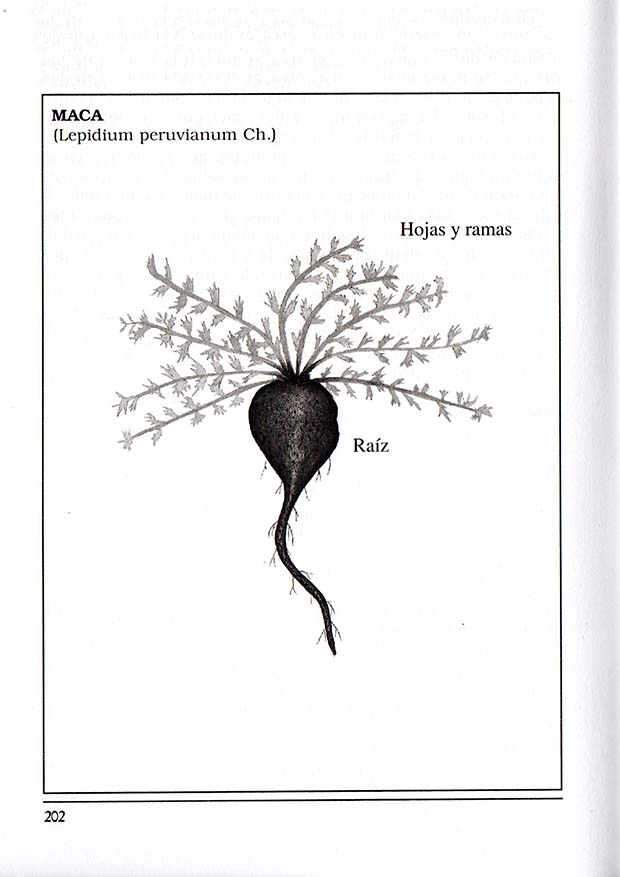 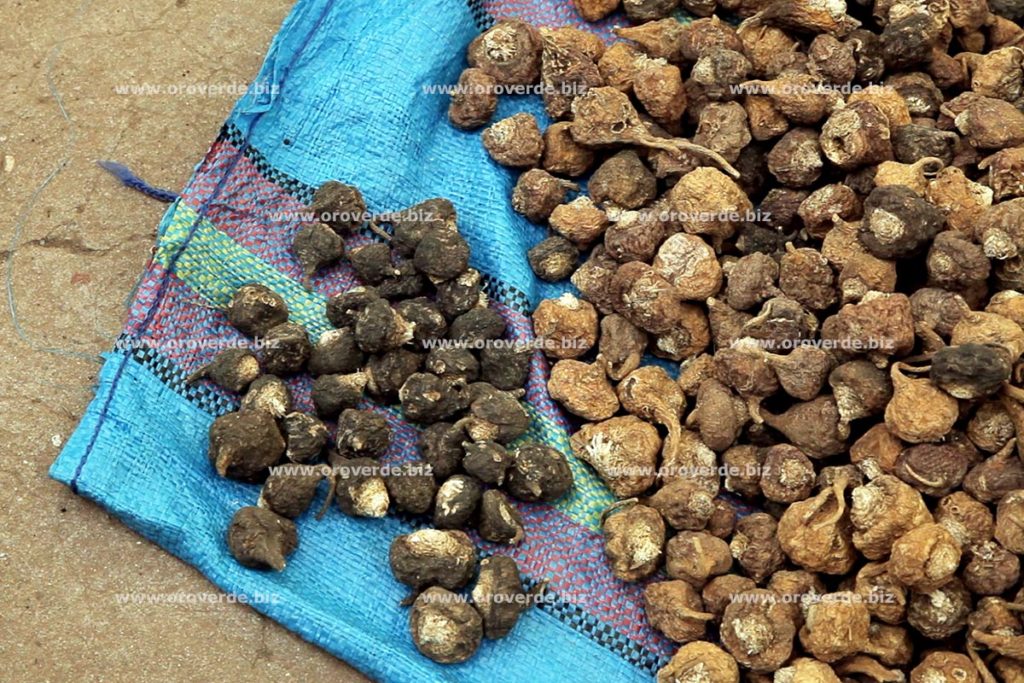 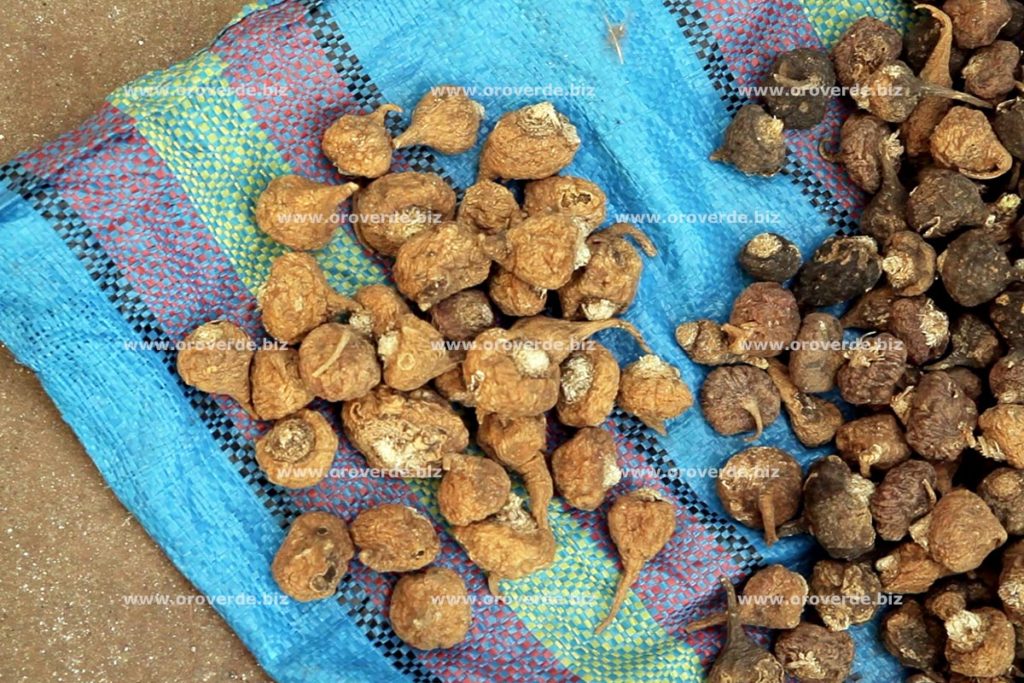 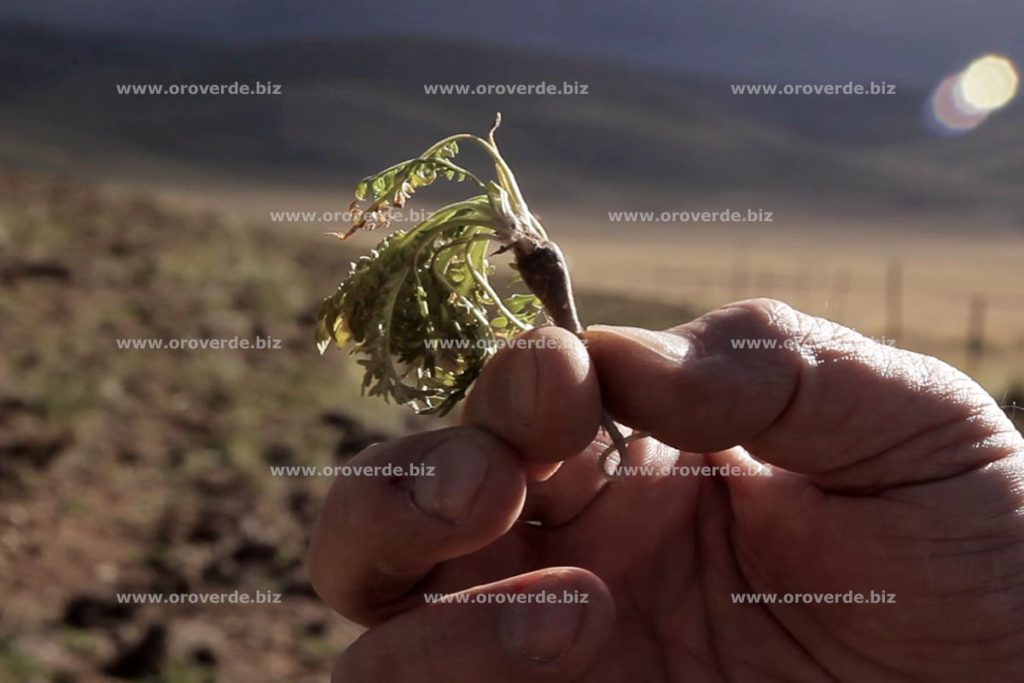 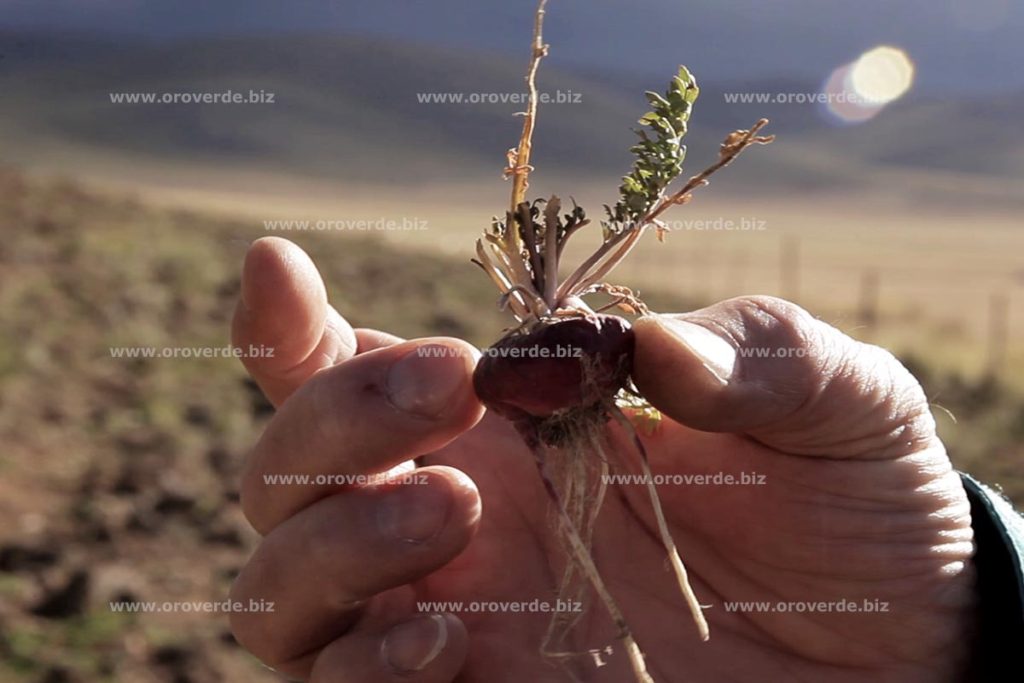 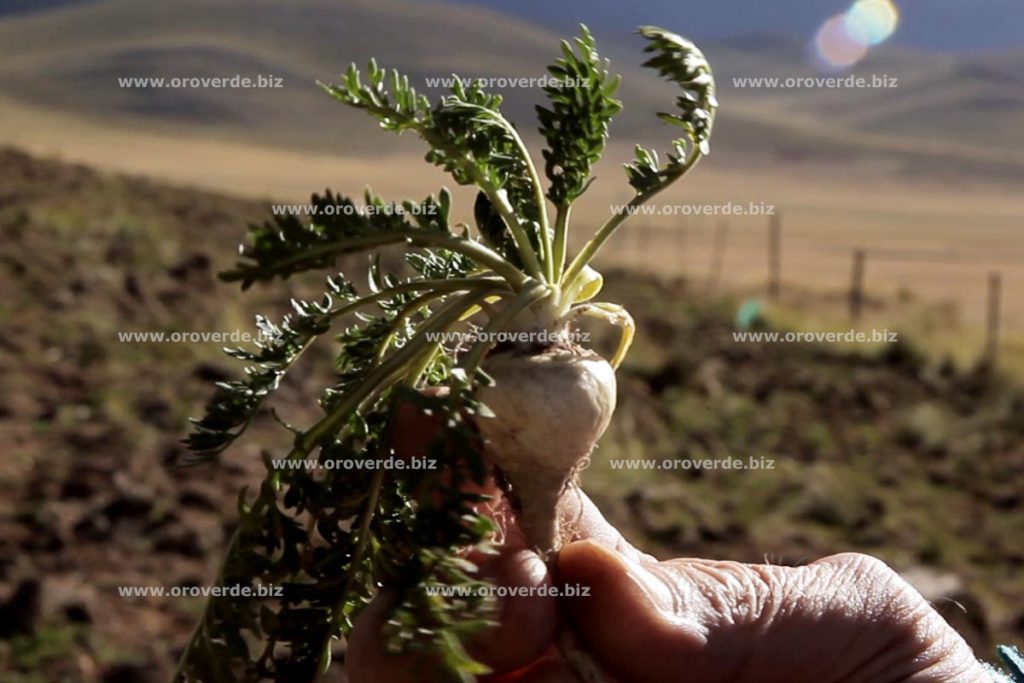 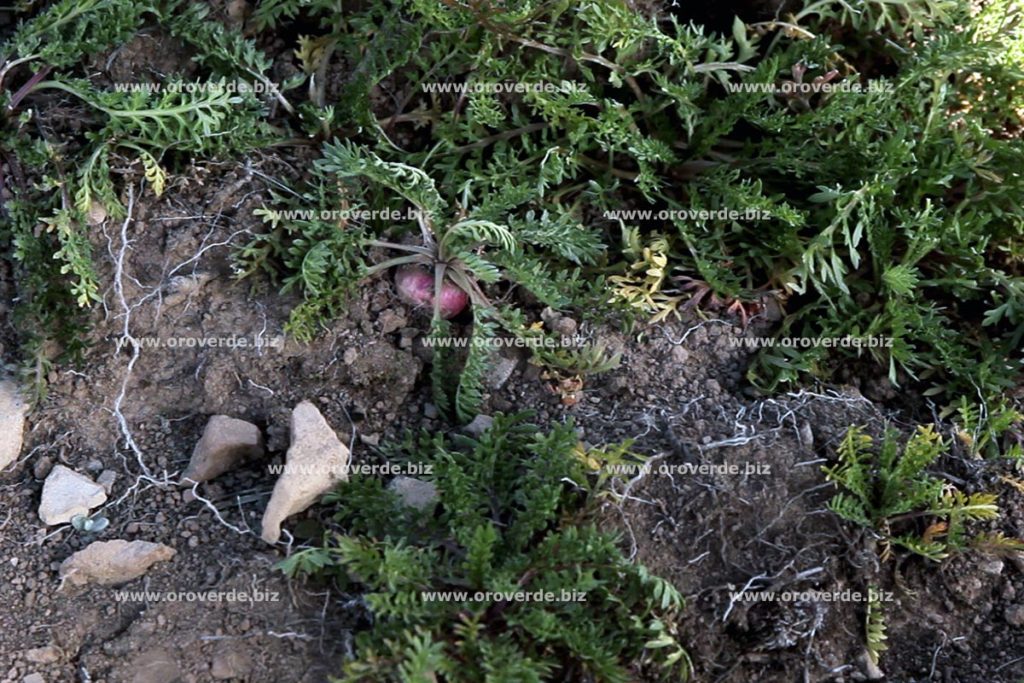 Maca is a perennial plant from the family of brassicaceae cultivated high in the Andes in the altitudes of 3.500 – 4.500 m above the sea level. It is one of the cultural plants most adaptable to cold climate. Owing to its low growth and floccose appearance it is easily overlooked on the farm fields. Its dentate leaves enclose to leafstalks. It forms small self-fertilizing flowers, white from the outside, typical for its family. The used part is a radical pyriform bulb up to 8 cm of diameter, of pale white-yellowish to dark red colouring. Unlike many other related plants maca reproduces by seeds. Though it is perennial it yields only once a year, needing about 7 – 9 months for the growth of a harvestable tuber. The region where maca occurs is a high altitude inhospitable land, with intensive sunshine, cutting winds and permanent icy weather. During the centuries of its existence maca completely acclimatized to these extreme conditions and poor stony soil which otherwise is practically unusable for agricultural purposes and fully adapted to the existing conditions. Maca was domesticated by Incas about 2000 years ago, though the archaeological findings of primitive cultures date maca cultivation much back, to somewhere around 1600 B.C.
For the Andean natives maca is a valuable commodity. Since practically no other crops grow here maca had often been exchanged for the produce from lower altitudes, such as rice, maize and beans. Recently a business with maca dehydrated powder began. The natives regularly consumed maca for its nutritive and therapeutic effects even before the coming of Incas. Maca is a main part of local diet for its high nutritive value. It is rich in sugars, proteins, starch and essential minerals, specially iodine and iron. Its radical bulb (tuber) is consumed fresh or dried. The fresh root is baked in ashes like batatas, the dried one is stored and afterwards boiled in milk or in water. The natives can also prepare a fermented sweet alcoholic beverage, popularly called maca chicha. In the region of Huancayo (Peru) a pudding and jam from maca is very popular because the root has its specific sweet taste and flavour.
Maca had been for centuries used to enhance fertility of people and animals. The first references date to the period shortly after the occupation of the territory by the Spanish conquistadors. The conquerors noticed a very low natality of their animals in the existing climatic conditions. Local natives recommended them to feed the animals with maca and the results were so apparent that it was mentioned by the chroniclers. A certain record from more than 200 years ago describes a payment for 9 tons of maca which was exported from the Andean region just for the purpose to enhance the natality. The effect of the fertility enhancement had for the first time been clinically tested in the beginning of the sixties of the past century on laboratory rats. Maca gained name „Peruvian ginseng”, though it has no botanical relation to proper ginseng. The dried root of maca has a high nutritive value, its composition is similar to that of cereals as maize, rice or wheat. It contains 59% of carbohydrates, 10.2% of proteins, 8.5% of roughage and 2.2% of lipids. Besides that it contains a number of essential amino-acids and a high level of calcium and iron, as well as a significant quantity of fatty acids including the linolenic, palmitic and oleic acids. It is rich in sterols and a number of minerals, it further contains alkaloids, tannins and saponins. Chemical analyses carried out in 1981 confirmed presence of biologically active aromatic isothyocyanates, especially p-methoxylbenzyl and isothyocyanate, to which the aphrodisiatic effect is attributed. Subsequent studies of maca attributed the effect of fertility enhancement to glucosinolates. The presence of alkaloids was confirmed, but they have not been quantified as yet.
Maca is worldwide popular for its energizing effect, for the enhancement of fertility and physical strain endurance, of thinking and concentration, of sexual activities of men and menstrual cycle and imbalance of female sex hormones regulation, including the enhancement of health in climacterium and at the chronic fatigue syndrome. It is used as an alternative to steroid anabolics for sportsmen (bodybuilders) for its rich content of sterols. Nowadays the dried root of maca is sold as a remedy or a diet supplement for enhancement of vitality and fertility. In Peruvian herbal medicine maca is also used as an immunostimulant, at anaemia, tuberculosis, menstrual irregularities, symptoms of climacterium, stomach cancer, sterility and of other reproductive or sexual disturbances, also for improvement of memory.
Due to a current worldwide demand a new species of maca called Lepidium peruvianum Chacon sp. has been cultivated.

We have obtained the following study by favour of Prof. Ing. César Barriga Ruíz, lecturer at Universidad Nacional Agraria La Molina in Lima:

The effect of Lepidium meyenii or Lepidium peruvianum in the form of gelatin tablets on a general improvement of men’s condition.This study has been carried out in order to prove the effects of Lepidium meyenii or/and Lepidium peruvianum on hormonal model, sexual behaviour and erection function, physical condition and reaction to stress, state of erythrocytes and nutritive values.A test sample of men at the age of 20 – 40 years has been selected. The men were separated into groups to which maca and placebo were administered in conformity with the adopted treatment.
The test took place from December 2000 to May 2001 under the sponsorship of the Peruvian University Cayetano Heredia, science and art faculties and the Institute for the Research of Highlands (High Mountains). The head of the research was Dr. Gustavo Gonzáles, other associates were Amanda Cordova, Arturo Chung, Arturo Villena, Carmen Goňez, Karla Vega, Julio Rubio, Manuel Gasco, Carla Gonzáles, Sharon Castillo and Diana Garayar.

For the above mentioned purposes the bulb is consumed directly fresh, cooked, dried or in the form of different puddings, drinks etc. Usually recommended dosage is 2 – 3 grams.